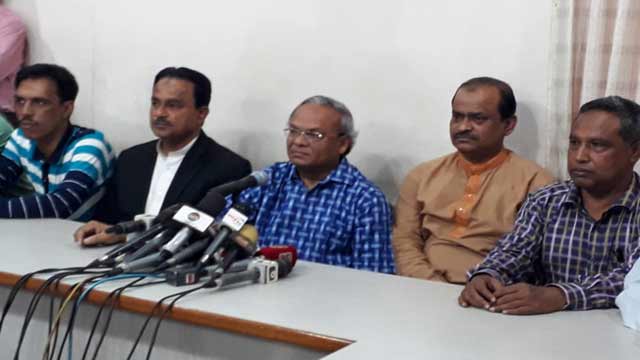 Dhaka, Feb 22 (Just News): BNP will show black flags instead of bringing out black-flag processions in the city on Saturday protesting the denial of permission for its rally scheduled to be held today (Thursday) demanding the release of party chairperson Begum Khaleda Zia from jail.

BNP senior joint secretary general Ruhul Kabir Rizvi came up with the announcement at a press conference at the party's Nayapaltan central office on Thursday.

Besides, he said, their party will arrange a discussion on Friday at the Institution of Engineers, Bangladesh, marking the Language Martyrs' Day and International Mother Language Day.

"We've earlier announced to bring out black-flag processions in the city protesting he denial of permission for our rally. We've brought a change in it as we're going to show black flags on the day," the BNP leader said.

He called upon their party leaders and activists and all democratic and nationalist forces to show black flags from their respective positions registering their poorest against the government's undemocratic attitude.

BNP sought permission to hold a rally today either at Suhrawardy Udyan or in front of its Nayapaltan central office demanding the release of its chairperson Khaleda Zia from jail, but police did not allow them to hold the programme.

On February 8 last, BNP Chairperson Khaleda Zia was sent to jail after a special court sentenced her to five years' rigorous imprisonment in the Zia Orphanage Trust case.