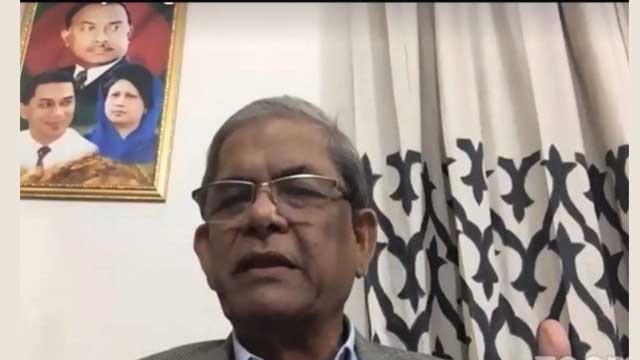 BNP Secretary General Mirza Fakhrul Islam Alamgir on Thursday alleged that a conspiracy is there to keep Bangladesh subservient to others weakening its existence and sovereignty.

"The current government has deprived the people of Bangladesh of their rights in a planned way. They’re now trying to push people away from the identity they have,” he said.

Speaking at a webinar, the BNP leader said, “There’s a plot to make Bangladesh subservient to others forgetting the nation’s uniqueness, independence and sovereignty. We must resist such a plan.”

‘Seminar and Symposium Committee', formed by BNP, to celebrate the golden jubilee of the country’s independence arranged the webinar.

Fakhrul said their party wants to protect the nation from the current ‘appalling’ situation following the ideology and directives of its founder Ziaur Rahman. “Our only slogan is that we don’t want to be shackled. Let’s all get united and move forward towards that goal.”

He said Bangladesh will get stronger as a nation if people’s feelings for the country and patriotism can be reinforced.

The BNP leader said their party founder had given the nation a new identity and unique existence by gifting Bangladeshi nationalism through his farsighted thinking.

Recalling Zia’s role in the Liberation War, he said the country’s independence cannot be thought of separately from Ziaur Rahman as the entire nation was inspired and joined the war by his ‘declaration’ of independence.

“Those who’re in government want to identify him (Zia) as an unknown Major. But the then seven and a half crore people of Bangladesh jumped into the war following the declaration of this unknown Major. Their (Awami League’s) great leaders at that time could not make that announcement in front of the people,” Fakhrul observed.

He accused Awami League of trying to ignore Zia and his role before the young generation by carrying out a ‘false’ campaign against him and ‘distorting’ history. “I just want to say one thing for them that acknowledge the contributions of everyone. You must recognise what Ziaur Rahman deserves.”

The BNP secretary general said the nation liberated the country with the basic aspiration of establishing a democratic governing system and build free society.

“But it’s unfortunate for us that after 50 years of the country’s independence we couldn’t implement it…we should be ashamed of that we still have not been able to build a proper political structure and a system for a peaceful handover of power. This situation has been created only because of the current government which has usurped power by force and got isolated from people,” Fakhrul said.