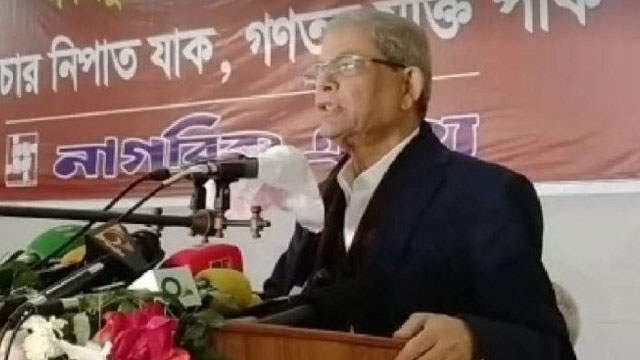 BNP secretary general Mirza Fakhrul Islam Alamgir has said that people do not trust the coronavirus vaccination. They are dubious about it. In England, Queen Elizabeth took the first vaccination in order to dispel such doubts.

He said, "I propose that you, prime minister (Sheikh Hasina), take the first vaccination. Then tell the people there is nothing to fear. Then people's confidence will be restored."

Mirza Fakhrul was speaking at a discussion held 12:30pm on Sunday at the National Press Club.

The discussion, 'Down with autocracy, free democracy,' had been organised by Nagorik Oikya on the occasion of the historical mass-uprising day.

Mirza Fakhrul said that the government's actual aim had been to fill their pockets with the coronavirus stimulus funds. They pilfered the coronavirus testing funds and were doing the same with the vaccines.

He said, "The government is playing with people's lives. Their main aim is to loot the funds."

The BNP leader said that the main crisis at the moment was that an unelected government was cheating the people and forcefully remaining in power with no accountability. They are using the state machinery to politicise the state. He said that the people were being deprived of their rights.

He said that the country needed a government elected by the people to establish the rights of the people. The present government must be forced to step down by means of a mass uprising.

Founder of Gonoshasthaya Kendra, Zafrullah Chowdhury, speaking at the discussion, raised allegations of corruption and pilferage against the government.

He said, "Corruption and pilferage are synonymous with this government. There is corruption in every single sector, every singly activity. It has taken Tk 300 billion for the Padma bridge instead of the estimated Tk 100 billion. We do not know how the money has shared, but it cannot be denied that this was pilfered."

Zafrullah said that the coronavirus vaccine had been bought at inflated rates. He said the vaccine which Europe was buying for two dollars, was being bought by India for two or two and a half dollars. But Bangladesh was buying that for five dollars because a private company, as an agent, was making money. He said that a specific company was being favoured in the purchase of the vaccine. He said, "The government is going down a very wrong path."

He said that the vaccine must not be procured through the private sector. It is the government's moral duty to correct its wrongs concerning the vaccine.

Presiding over the meeting, convenor of Nagorik Oikya, Mahmudur Rahman Manna, said the government had stolen votes for itself and the people had no vote. The government will not give the people the right to vote. They want to remain in power by any means. He said, this government will be toppled this year through a mass uprising like that of 1969.

"This government is sitting on our back like Sindbad's ogre. The sooner it leaves, the better. Everyone must unite on one platform and oust the government," Mahmudur Rahman Manna said.

Chief coordinator of Gono Sanghati Andolan, Zonayed Saki, said that this government spoke against militancy, extremism and terrorism, but they themselves were running the country like militants, extremists and terrorists.

He said that they had snatched away people's rights and were running the country. The people's living standards could never improve in a country where the people had no rights, no independence. It was imperative to establish democracy for the people.

Chairman of Kalyan Party Syed Muhammad Ibrahim said Bangladesh will not belong to the corrupt. This corrupt must be removed through a united movement.