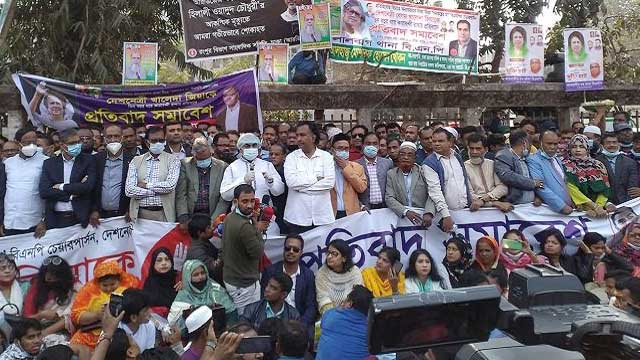 BNP on Monday urged the government to prove the Qatar-based news channel Al Jazeera’s recent report on Bangladesh ‘false’, and promised to cooperate with it in this regard.

“We didn’t liberate the country to hear Bangladesh is run by mafias and it has become a mafia state. We don’t want to hear it at a time of our independence’s golden jubilee,” said BNP standing committee member Mirza Abbas.

Speaking at a protest rally, he said, “We would like to tell the government you please prove everything that came in Al Jazeera (report) is a lie. We’ll support you and cooperate with you, but you prove it.”

As part of BNP’s countrywide programme, its Dhaka south and north city units jointly arranged the programme in front of the Jatiya Press Club, marking the third anniversary of the imprisonment of its Chairperson Khaleda Zia in a graft case.

Abbas said the government is making ‘hollow statements’ over the Al Jazeera report instead of refuting it with facts and evidence.

He came down hard on Foreign Minister AK Abdul Momen for his comment that Bangladesh is going to sue Al Jazeera channel for airing the report "All the Prime Minister's Men" with incorrect information.

“There’s a minister…I hate to utter his name as he used to make unguarded comments and what he says all are nonsense. He (minister) said they’ll sue (Al Jazeera). Don’t waste time saying what you can't do. If you can sue, show it by filing a case,” Abbas said.

He said it is regrettable that the nation has to hear at the time of the golden jubilee of independence that Bangladesh is a “mafia state”.

Another BNP standing committee member Gayeshwar Chandra Roy said all that have been published in Al-Jazeera are just a trivial part of huge corruption in Bangladesh.

He said the government is ignoring the report by registering its normal protest as per its habit. “You have to prove that Al Jazeera is not right. People want to get rid of the stigma of Al Jazeera report,” Gayeshwar said.

Meanwhile, the Foreign Ministry in a statement termed the Al Jazeera report "All the Prime Minister's Men" as "false, defamatory and a politically motivated smear campaign.