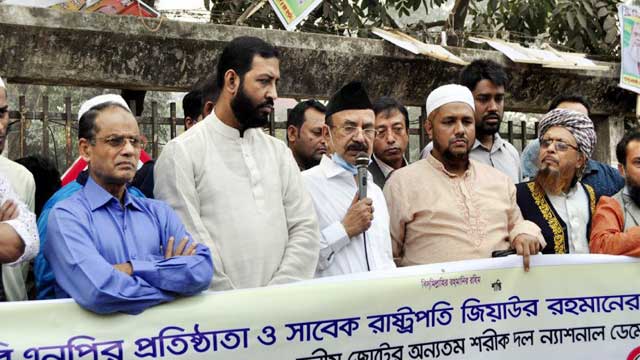 "You (the government) aren’t supposed to be very upset by Al-Jazeera’s report as you’ve a robust digestive power. You can digest it as you digested so many things in the past. This is just an incident among hundreds of thousands of such events,” he said.

Speaking at a human chain programme, the BNP leader urged the government to deal with the report properly with facts and stop making ‘hollow statements’. “Prove that what Al Jazeera is saying isn’t true. Why is it so hard to do this?”

Recalling Ziaur Rahman's role in the Liberation War, Gayeshwar said, the BNP founder was the best hero in the war field. "The most Pakistani army members were defeated by his force and the most gallantry titles were given to the freedom fighters who were in the 'Z' force [commanded by Ziaur Rahman]."

Among the all Bir Uttam title recipients, he said Zia was the only freedom fighter who fought in the land of Bangladesh and he did not set up any camp and stayed outside Bangladesh border during the war.

The BNP leader said he had an idea that Awami League would give a posthumous reception to Ziaur Rahman for his role in the Liberation War on the golden jubilee. “But they’re not doing what they are supposed to."

He said Ziaur Rahman had ‘declared’ the independence of the country and urged all to join the war accepting Sheikh Mujibur Rahman’s leadership.

“Even though Sheikh Mujib was in jail, Ziaur Rahman kept him present (Mujib) before people through announcing the independence on his behalf. I thought that the Awami League would realise this on the golden jubilee and thank Ziaur Rahman for it. But they have taken an opposite move,” the BNP leader observed.

Refuting Jamuka’s allegation, he also said Zia had not violated the Constitution. "Ziaur Rahman had upheld the fundamental rights of the Constitution. He had given democracy a complete shape and introduced the democratic process at all levels and restored the press freedom.”

Gayeshwar called upon the government to come the ‘path’ of democracy.

The Jatiya Muktijoddha Council (Jamuka) at a meeting on Tuesday discussed the ways to revoke the gallantry title of Ziaur Rahman for ‘violating’ the Constitution and ‘abetting’ the self-proclaimed killers of Bangabandhu Sheikh Mujibur Rahman in escaping the country.

Bir Uttam, the second-highest award for individual gallantry in Bangladesh, was conferred on Ziaur Rahman for his contributions to the Liberation War as a sector commander.