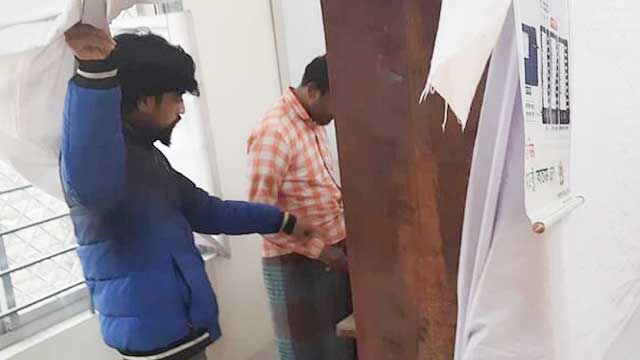 A man was killed and several dozens were injured in the fourth-phase municipal elections on Sunday as the polling was marked by violence, irregularities and boycott by opposition candidates.

According to the New Age correspondent in Chattogram, a man was killed and eight others were injured in a clash between the supporters of two councillor candidates in the Patiya municipality polls, both local leaders of the ruling Awami League.

The AL did not formally give support to any of the councillor candidates.

The deceased was identified as Md Abdul Mabud, brother of the councillor candidate Md Abdul Mannan of ward-8.

Local people said that supporters of ward-8 councillor candidates Md Abdul Mannan and Sarwar Kamal Mosleh Uddin Razib got engaged in clashes at South Gobindorkhil around the noon. Both groups fired bullets at each other.

Meanwhile, Jatiya Party mayoral candidate Md Shamsul Alam for Patiya municipality announced at about 2:00 pm that he boycotted the polls.

But, addressing a press conference at the Nirbachon Bhaban in the capital, Election Commission secretary Humayun Kabir Khandaker said that the commission considered the polls to be ‘good’.

He accused the candidates of their involvement in the murder in Patiya municipality.

‘The death is very unfortunate. The clash took place outside the polling station and it did not hamper the polling environment,’ he said.

He disclosed that the commission suspended the voting in four centres in Narsingdi, one centre in Sonaimuri of Noakhali and seven centres in Shariatpur.

Besides Abdul Mabud, at least four other people, including a councillor-elect, have so far been killed in the electoral violence in various parts of the country while over a hundred people have been injured.

Clashes were also reported from other districts while rival AL mayor and councillor candidates boycotted the polls in several municipalities and wards.

Like the previous three phases of the staggered municipal polls, AL candidates are set to win most of the mayoral posts in the fourth phase of the polls held at 55 municipalities on Sunday.

In this phase, the AL mayor candidate and all the councillor candidates it backed have been elected unopposed in Parshuram municipality under Feni.

According to our correspondents, at least 20 mayoral candidates boycotted the polls in protest against rigging and other irregularities.

Our Tangail correspondent reports: At least 10 people were injured in a clash between supporters of the AL and Bangladesh Nationalist Party mayor candidates in the Haripur Government Primary School polling centre area in Kalihati municipality.

Our Khagrachari correspondent reports: At least five people, including the BNP mayor candidate’s brother, were injured in an attack allegedly made by AL activists in the Matiranga municipality polls.

In Lalmonirhat, at least six people were injured in a series of chase and counter-chase between supporters of rival mayor and councillor candidates in Lalmonirhat municipality.

While on duty, local journalist Sayeed Taherul Islam Sufi was beaten by supporters of the AL mayor candidate at the Saptana Government Primary School centre in Lalmonirhat town.

Sayeed alleged that he was attacked by them as he videoed a clash with his mobile phone. The attackers snatched his phone, deleted the video and beat him, he said.

Our Noakhali correspondent says: A youth received bullet injuries and two others were hurt during a clash outside a polling station in Noakhali’s Sonaimuri municipality.

The incident occurred at 11:30am at Alok Para under ward-6.

Witnesses said that the clash took place between supporters of two rival councillor candidates outside a polling station.

A crude bomb was exploded and gunshots were fired to scare away the voters from the polling centre, they said.

A youth named Mohon was hit by a bullet, they added.

The agent was later removed from the polling centre after the evidence of his wrongdoing was noticed, presiding officer Uzzal Kumar Kundu told reporters.

In Rajshahi, the voting at a centre in Nawhata municipality remained suspended for over half an hour after a clash over attempts to capture the centre, allegedly by supporters of the Awami League’s mayor candidate, said presiding officer of Bagdhani Government Primary School polling centre Praddut Kumar Pramanik.

In Bagerhat municipality, BNP mayor candidate Sayed Niyaz Hossain Shaibal boycotted the election alleging that his polling agents were beaten and ousted from polling stations, voters were prevented from entering polling centres and supporters of the AL candidate stuffed ballots.

Our correspondent in Lakshmipur adds: The mayor candidates of the BNP and the Jatiya Party along with an independent contestant boycotted the polls on allegations that AL activists forced voters to vote for the ‘boat’ symbol openly at polling stations in Ramgati municipal polls.

The first phase of the municipal elections was held on December 28, 2020 at 23 municipalities.

The past three phases of the municipal elections witnessed massive violence and irregularities with one BNP-backed councillor candidate killed in Sirajganj.

Over a dozen BNP mayor candidates boycotted the polls protesting irregularities in those phases.

The fifth phase of the elections is scheduled to be held on February 28 and the sixth phase on April 7.-New Age