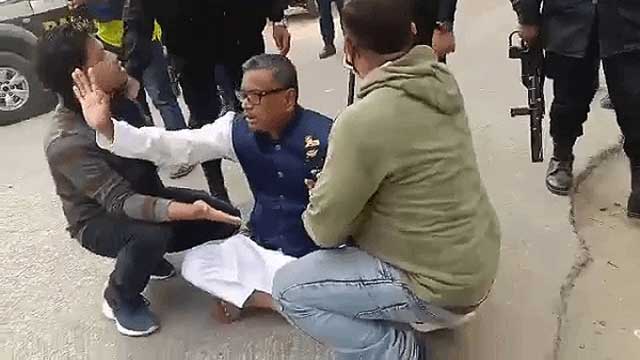 Police have reportedly baton-charged and injured multiple supporters of Abdul Quader Mirza, mayor of Basurhat municipality, as they were observing a dawn-to-dusk hartal in Companiganj upazila of Noakhali on Saturday.

Quader Mirza, younger brother of Road Transport and Bridges Minister Obaidul Quader, called the hartal in Companiganj, protesting the alleged attack on his men by his rivals on Friday, according to several media reports.

According to witnesses, the supporters of Quader Mirza armed with sticks brought out a procession early in the morning.

When the procession was heading for the Companiganj police station from Basurhat Rupali Chattar, they locked into an altercation with the police and exchanged heated words.

At one stage, the police chased Quader Mirza's supporters and baton-charged them to disperse the group.

Later, Quader Mirza sat on the street for around half an hour in protest against the use of excessive force by police.

Previously on Friday, at least 30 people were injured in clashes between two factions of the ruling Awami League -- one was led by Quader Mirza and another by Mizanur Rahman Badal -- in Companiganj.

On Thursday, Mirza announced a hartal, demanding to put a stop to the evil politics of two ruling party lawmakers from the Noakhali and Feni districts.

He also demanded withdrawing the deputy commissioner, superintendent of police, and officer-in-charge of Companiganj police station.