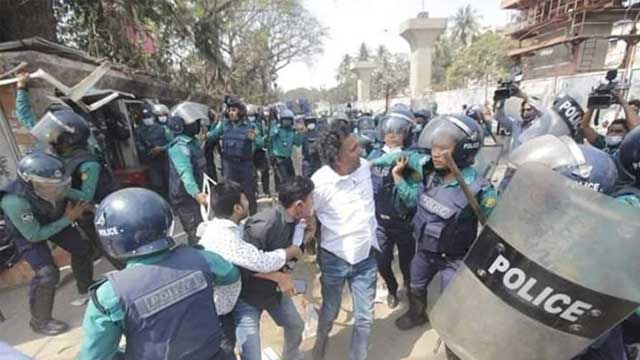 A clash is underway between police and the members of Chhatra Dal, the student wing of the opposition Bangladesh Nationalist Party, at the National Press Club area on Sunday

The clash erupted about 11:00 am when police charged baton on to Chhatra Dal members disperse them after they tried to hold a demonstration, witnesses said.

Leaders and activists of Chhatra Dal earlier started gathering at the press club area around 10:00 am for holding the demonstration protesting at a government move of cancelling the gallantry award of late president Ziaur Rahman and the death of writer Mushtaq Ahmed in custody.

Sohel, a Chhatra Dal activist, told New Age that police charged baton on them and fired tear-shell as soon as they came out of the press club to hold their programme.

‘Many of us were injured in the police attack,’ he said, without giving any number.

He said that Chhatra Dal activists attacked police from inside the press club and threw brickbats at them.