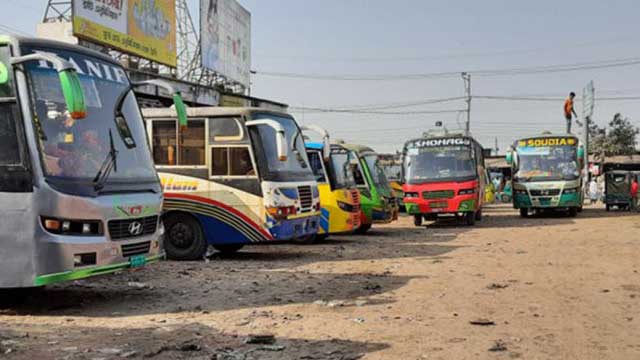 Road communication from different districts to Rajshahi has been suspended after BNP announced their divisional rally in the district tomorrow.

"Bus movement was normal in the morning today. But later the number of buses has reduced slowly. So, we have stopped the movement of buses," he said.

When asked about the rally, BNP's District Publicity Secretary Nazmul Islam told The Daily Star, "We have sought permission to hold the divisional rally at Shaheb Bazar, Gonokpara and Sonadighi intersections in Rajshahi city around 3:00pm tomorrow. But we are yet to get permission."

BNP held a press conference around 1:00pm today at the party office in Monupara.

Bus owners' association and police officials did not say anything about this clearly.

Commuters have been bearing the brunt due to the suspension of bus movement, our Chapainawabganj correspondent reports.

Police set up check-posts on Biswa Road intersection around 8:00am in the district. Since then, bus movement has been stopped from Chapainawabganj to Rajshahi, according to witnesses.

Even buses bound for Dhaka from the district remains suspended, they said.

But police sent back the buses, which left the district after 8:00am, from the Biswa Road intersection, he said.

When asked, Chapainawabganj District Bus Owners' Association President AK Emon Lutfar Rahman Firoz said that he did not know any detail about the suspension of bus movement.

The district's Superintendent of Police Abdur Rakib said, "The workers stopped the vehicular movement due to their upcoming election."