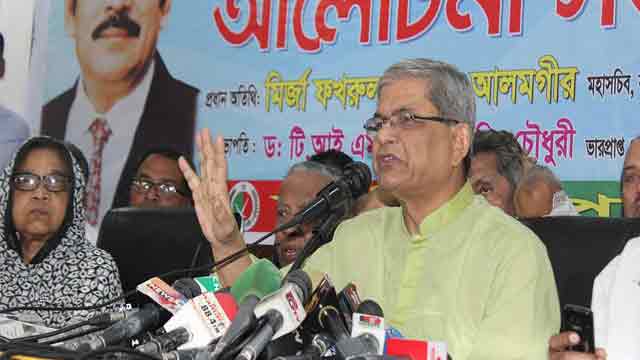 Dhaka, Mar 9 (Just News): The Bangladesh Nationalist Party (BNP) on Friday alleged that law enforcers violated the Supreme Court's (SC's) directives by arresting one of its activists from a political programme without any warrant.

"I would like to express my anger and sorrow as I couldn't save a Chhatra Dal leader who tried to escape arrest holding me tight. The law enforcers swooped on our programme in front of the [National] Press Club and snatched him by tearing his clothes," he said.

The BNP leader further said, "It's a rare and most disgusting incident in Bangladesh's political history. The law enforcers violated the directives of the Supreme Court by making such an arrest [without any warrant].”

On Thursday, police arrested JCD leader Mizanur Rahman Raj from BNP's sit-in programme in front of the National Press Club and foiled the event just 13 minutes before its scheduled conclusion.

Fakhrul described the current government as a 'dangerous demon' and alleged that it has destroyed all the democratic institutions only to hang onto power.

He said their chairperson has been convicted in a 'false' case 'unlawfully' to keep her, BNP and the 20-party alliance away from the next election. "Their main motive is to retain power without a competitive election."

The BNP leader said Khaleda Zia is being deprived of her legal right of having bail due to the government's interference.

He also alleged that the government is controlling the judiciary by establishing a one-party rule under a different cover.

Referring to the chief election commissioner's comment that the commission will not take any initiative to bring all the political parties to the next general election, Fakhrul said KM Nurul Huda's remark has reflected the government's desire.

"We know you won't take any move for an inclusive election as you have been made CEC to ensure Awami League's return to power through lopsided polls," he added.