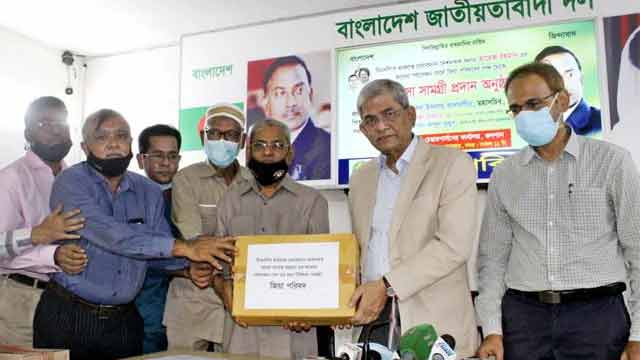 He said: “The strict lockdown was lifted suddenly allowing everything to operate as usual. Thousands of people are walking together and doing everything. But only the educational institutions remained closed.”

While handing over medicines provided by Zia Parishad for BNP’s Covid-19 help centres at party chairperson’s Gulshan office, Fakhrul said the government has made an arrangement for depriving the future generation of education by not reopening schools, colleges and universities.

He said every country in the world worked out effective plans for vaccination and the continuation of academic activities alongside protecting people’s lives and livelihoods amid the pandemic. “But we don’t have any plans in our country. It’s causing a terrible loss to the new generation.”

The BNP leader said many students do not have the ability to buy computers or smartphones to avail of the scope of online education. “There's a newspaper report that students are now selling balloons and nuts to help their parents as their schools are completely closed. That means they’ve already got diverted.”

He said the government is yet to take any step to recover from such a dangerous loss suffered by the new generation due to the closure of the educational institutions. “They (government) are only misleading people with various misinterpretations and misinformation.”

The government shut the educational institutions on March 17, 2020 after the country had reported its first Covid-19 cases on March 8. Then the closure was extended several times. The latest extension is supposed to continue till August 31.

Fakhrul alleged that the government has completely failed to tackle coronavirus and ensure proper treatment for the virus-affected people. “It has not been able to create confidence in people that they will get treatment. The entire healthcare system has collapsed just because of corruption.”

He alleged that the government is confusing people by spreading lies and false campaigns over the Covid vaccines.

“Experts think 260 million doses of vaccines are required to bring people over 18 years under the vaccination coverage. But they bring 200,000- 300,000 doses as gifts and donations. They announced to provide 10 million doses to people every day, but they didn’t have enough vaccines,” he said.

The BNP leader said the government has been deceiving people by dishing out misinformation and false hopes about the vaccines. “This regime is a shameless and fraudulent one.”

Hitting back at Quader

He said the ruling party leaders are trying to divert people’s attention to a different direction from its failure to contain the coronavirus and ensure vaccines by making various reckless and indecent comments against their opponents.

Fakhrul alleged that the ruling party leaders are also conducting false campaigns against Ziaur Rahman involving him with the August 15, 1975 killings. “Those who belong to Awami League were involved in the murder incident.”

He said the government is trying to belittle Zia by giving people false information against him out of fear of his popularity. “No matter what you say, you won’t be able to remove his name from the hearts of people.”