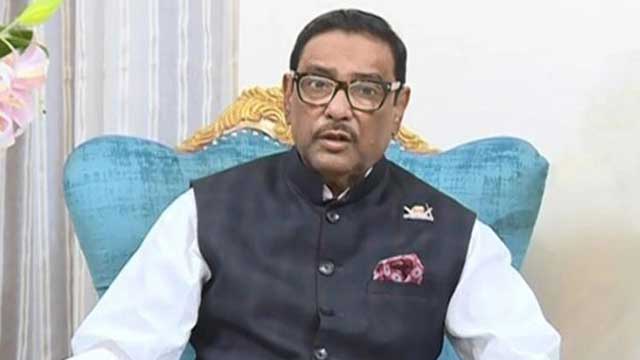 Awami League General Secretary Obaidul Quader today said BNP is making ill attempts to create a chaotic situation in the country in the name of mass-movement.

"BNP is daydreaming of mass-movement. But Bangabandhu's daughter Prime Minister Sheikh Hasina's development activities and achievements have put a dark shadow of crisis on BNP's movement. Their dream of a mass movement is now tantamount to nightmare," he said.

Quader, road transport and bridges minister, said this at a press conference at his official residence here.

He said the people are so happy over the development and achievement of the government that they don't respond to BNP's repeated calls for movement in the last 13 years.

"The people didn't respond to BNP's call for movement in the last 13 years and I believe they will do the same in future too. So, BNP's desire for movement will turn into despair soon," he observed.

BNP is dreaming of making revolution in the style of Khomeini (Iranian politician and religious leader Sayyid Ruhollah Musavi Khomeini, also known as Ayatollah Khomeini who led a revolution in Iran) by bringing back its acting Chairman Tarique Rahman from the bank of river Thames by creating so-called mass-movement, he mentioned.

In response to BNP Secretary General Mirza Fakhrul Islam Alamgir's comment that movement has spread all over the country from Dhaka University and the party leaders and workers will not return home until the government is ousted, Quader said: "Through this comment we are noticing evil-attempts to create a bad situation in the country."

About another comment of Fakhrul that BNP took to streets to restore democracy not to bring any individual or party to power, the AL general secretary said the people think that this comment is an extreme falsehood and fraudulence with the nation.

It is nothing but a falsehood and fraudulence that the party, which had 'killed' democracy during its tenure, would restore democracy after going to power again, he added.