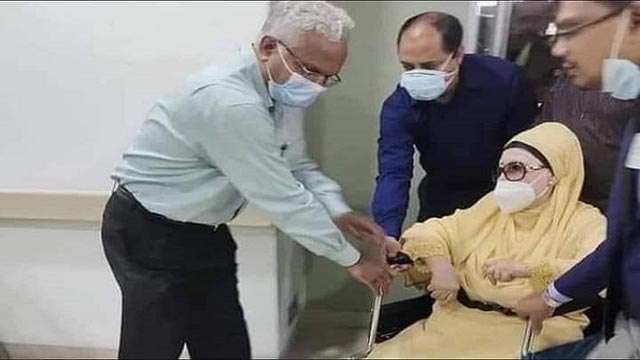 BNP Chairperson Begum Khaleda Zia's angiogram has been completed and stenting has been done on an artery that is 95% blocked, her personal doctor Professor AZM Zahid Hossain said.

“Khaleda Zia has several blockages in her heart, and one of them is 95% blocked,” he told on Saturday.

A ring has been put on the block, but Khaleda Zia's condition can change at any time as it is still unstable.

Previously, the medical board said Khaleda Zia had suffered a coronary heart attack.

It decided to perform an angiogram on the BNP chief later in the day.

The decision was taken at an emergency meeting of the 12-member medical board formed for ensuring the treatment of Khaleda.

"Madam has suffered an acute coronary heart attack. The medical board has decided to perform an angiogram on her very soon,” Zahid said.

At the same time, he said the medical board has asked Khaleda’s family members to take steps for sending her abroad for better treatment.

Earlier, the medical board sat in an emergency meeting at 11:10am and reviewed the latest condition of the BNP chairperson and the reports of various tests on her heart.

The BNP chief was taken to the coronary care unit (CCU) of the hospital at 3:20am, he added.

Zahid, however, declined to elaborate on her illness.

The BNP chief left her Gulshan residence for the hospital at 2:55am and was admitted there at 3:15am, said her media wing member Sayrul Kabir Khan.

Coming out of the hospital around 4:30am, Fakhrul said after some tests, the doctors found that she has cardiac problems.

“Madam’s condition is stable now. How complicated her problem is can be confirmed after she undergoes different tests, especially an angiogram,” he said.

A medical board will analyze Khaleda’s condition and reports at 10:30am Saturday and decide the next course of treatment, Fakhrul added.

He hoped that Khaleda would recover as she did in the past.

The BNP leader urged the country’s people to pray for her speedy recovery.

The BNP chairperson last went to Evercare on April 6 for health check-ups.

The 76-year-old was last admitted to Evercare on November 13 last year where she was diagnosed with liver cirrhosis.

On February 1, Khaleda returned home after an 81-day stay at the hospital as she was suffering from internal bleeding caused by liver cirrhosis.

The former prime minister was sent to the Old Dhaka Central Jail as a lower court sentenced her to five years’ imprisonment in the Zia Orphanage Trust corruption case on February 8, 2018.

Later, she was found guilty in another corruption case the same year.

Amid the Covid-19 pandemic, the government temporarily freed Khaleda from jail through an executive order suspending her sentence on March 25, 2020, with conditions that she will stay at her Gulshan home and not leave the country.