Govt will be responsible if anything bad happens to Khaleda Zia: BNP 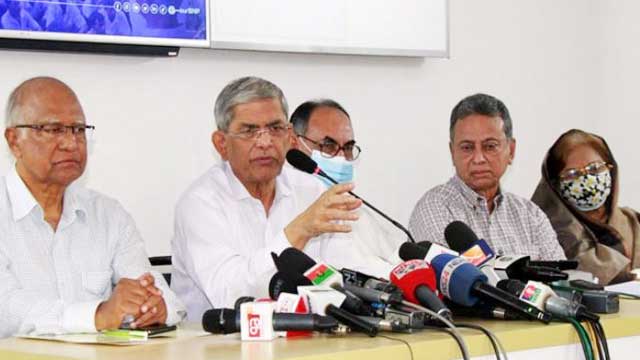 A ring (stent) has been placed in the artery of BNP chairperson Khaleda Zia after she suffered a mild heart attack, said party secretary general Mirza Fakhrul Islam Alamgir on Saturday.

“Doctors performed an angiogram on Khaleda Zia and found 99 percent blockage in her main coronary artery. They then successfully placed a ring there by removing the blockage,” he said.

Fakhrul came up with the information at a press conference at BNP Chairperson’s Gulshan office.

Earlier at an emergency meeting, he said the medical board formed for ensuring treatment of Khaleda at Evercare Hospital decided to perform the angiogram as she suffered a mild heart attack.

He said the BNP chief was suffering from suffocation and breathing problems following the heart attack.

Doctors hoped that she will get temporary relief from the heart problems as the ring has been installed, the BNP leader said.

Stating that Khaleda’s life will be at stake if she cannot receive advanced treatment, he renewed their party’s call for allowing the BNP chief to go abroad to save her life.

Fakhrul hoped that good sense would prevail upon the government this time to allow Khaleda to go abroad for advanced treatment. “Otherwise, they will be held responsible if anything bad happens to her.”

In response to a question, Fakhrul said Khaleda has a heart disease which is threatening her life. “Physicians now have been able to provide a temporary solution to the problem. But it is not possible to treat her other diseases in the country. She needs to be treated in an advanced center outside the country. ”

As in the past, he said the medical board today (Saturday) suggested sending the BNP Chief abroad for advanced treatment.

Asked what steps BNP would take to send the BNP chairperson abroad, he said they are again urging the government to allow her to go abroad. “No decision has been taken yet by our party in this regard. Of course, we will do it."

Fakhrul said it is the demand of the people of Bangladesh that Begum Khaleda Zia be sent abroad to save her life.

Earlier, Khaleda Zia was admitted to Evercare Hospital in the capital in the early hours of Saturday as she suddenly fell ill.

The BNP chief was taken to the coronary care unit (CCU) of the hospital at 3:20am, he added.

The BNP chief left her Gulshan residence for the hospital at 2:55amand was admitted there at 3:15am, said her media wing member Sayrul Kabir Khan.

Coming out of the hospital around 4:30am, Fakhrul said after some primary tests, the doctors found that she has cardiac problems.

"Madam's condition is stable now. How complicated her problem is can be confirmed after she undergoes different tests, especially an angiogram," he said.

He hoped that Khaleda would recover as she did in the past.

The BNP leader urged the country’s people to pray for her speedy recovery. It is for the fifth time the BNP was admitted to the hospital since she was infected with Covid-19 in April 2021.