Opposition to decide whether to join polls 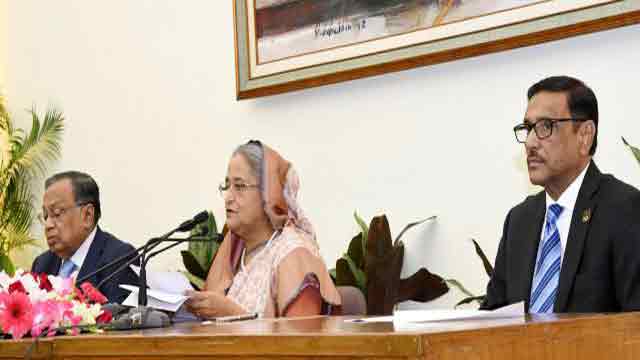 Dhaka, Dec 7 (Just News): Ruling out any dialogue with her political opponents, prime minister Sheikh Hasina on Thursday said it is the responsibility of a party to contest elections in parliamentary democracy.

Repeatedly asked by journalists if she would take any initiative to bring the Bangladesh Nationalist Party (BNP) to the next general elections, Hasina, also president of Bangladesh Awami League (AL), made no indication of any concession to the opposition for the sake of an inclusive election.

“In parliamentary democracy, it is each and every party’s responsibility to take decision about taking part in the general elections. [As a ruling party] We have nothing to do in this regard,” Hasina said.

“Why should in the multiparty democracy, political parties need to be persuaded to take part in the polls?” she asked newsmen who attended the press conference at the prime minister's official Ganabhaban residence.

Hasina, however, ridiculed the BNP in a manner of expressing hope that the party, which boycotted the 2014 ballot, would join the next parliamentary polls 'to retain its existence'.

Refering her initiative to hold talks with BNP chairperson Khaleda Zia before the 10th parliamentary polls, Hasina said, “Who should I talk to? I cannot talk to those who don’t show any courtesy.”

"I can't talk to them as they shut doors in my face," she said as she recalled her experience after the death of BNP chief Khaleda Zia's son Koko.

“My father [Sheikh Mujibur Rahman] made him [Zia] major general. But he killed thousands of army officers. He even introduced indemnity bill to save the killers of my parents and relatives,” Hasina said.

“You say Zia as an architect of multiparty democracy in Bangladesh. But what was the nature of his multiparty democracy? He rehabilitated the then banned anti-liberation forces including Jamaat-e-Islami, in the country’s politics,” she went on saying.

Hasina criticised her predecessor Khaleda Zia saying that during her tenure as prime minister, "we could not discuss in parliament the death of Ivy Rahman in a bomb attack on 21 August [2004] and the murder of Ahsanullah Master."

"Their people killed Shah AMS Kibria and many other Awami League men across the country but I took initiative to talk to her [Khaleda Zia] for the sake of the country. But you all know how her response was," she added.

Speaking of elections, Hasina said she would be in power if people vote for her party in the next elections but if not, she would bow out.

“It’s I who introduced the slogan, ‘I will cast my my own vote and vote for whoever I like’. So, if the people vote us to power, we’ll be in office, if not, we will not be here. And I have no regrets if I lose power as I played my part,” she told the press conference.

Ridiculing the BNP chairperson Khaleda Zia for offering her forgiveness, Sheikh Hasina claimed she has not committed any fault to seek apology.

“Why should I seek apology from her? What is my fault?” she said in response to a question on Khaleda Zia’s statement in the court that she had forgiven Hasina.

“Rather she should seek apology to the countrymen for her crimes,” Hasina added.

The premier called press conference to explain the background and outcome of just concluded Cambodia visit but issues related to elections, Rohingya crisis, corruption charges against the BNP chief and her family virtually dominated the presser.

Sheikh Hasina, however, highlighted the achievements of her three-day Cambodia visit and future plan of the government to strengthen ties with Phnom Penh in different fields in a written statement at the beginning of the press conference.