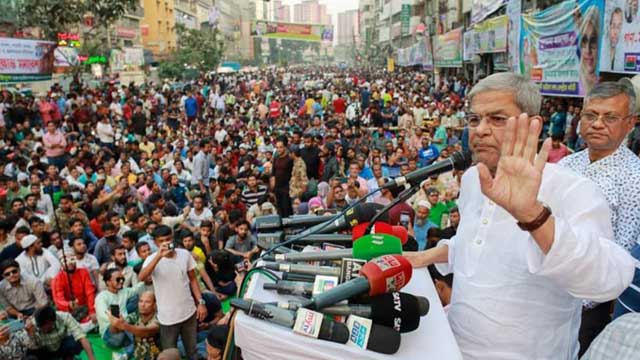 BNP Secretary General Mirza Fakhrul Islam Alamgir on Wednesday asked the government to refrain from filing false, fabricated and fictitious cases against the opposition leaders and activists considering its consequences.

“You have seen the sanctions have been imposed. If people now impose sanctions, the situation will be direr. So, stop the fictitious cases, attacks and arrests, and let the people's movement continue peacefully."

He made the remarks while addressing at a rally in Dhaka. BNP’s Dhaka south and north city units arranged the rally in front of the party’s Nayapaltan central office protesting against the filing of false and fictitious cases by police against the party leaders and activists

The BNP Secretary General urged the government to take necessary take steps so that their party can hold its rally at Nayapaltan, instead of Suhrawardy Udyan, on December 10.

“From our party, we sent a letter to DMP for holding our divisional rally at Nayapaltan a month ago. Many grand rallies were held here earlier without any chaos. So, take steps as per our letter as we’ll hold our rally here. It’s your responsibility to take proper steps in this regard,” he said.

Speaking at a rally, the BNP leader assured that they will hold the rally at Nayapaltan peacefully as part of their movement to restore democracy and people’s voting and other rights.

About their opposition to the Suhrawardy Udyan, Fakhrul said their party is not comfortable holding the political programme at the venue, which is surrounded by walls all around. “There’re no roads to easily enter and come out of it. There’s only one gate through which one or two people can enter.”

Under the circumstances, he called upon the government to permit their party to hold the rally peacefully at Nayapaltan changing its decision.

Otherwise, the BNP leader warned that the government will be held responsible for any untoward incident centring the rally.