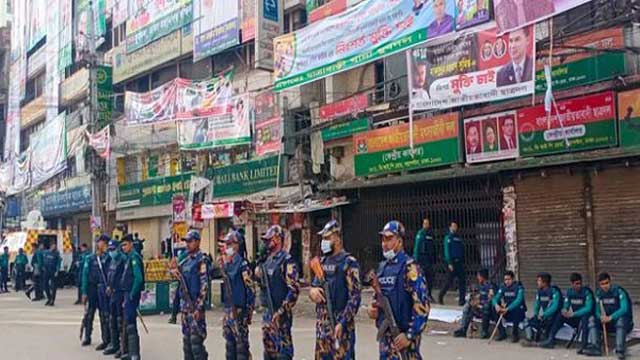 The central office of the main opposition Bangladesh Nationalist Party at Naya Paltan in Dhaka that was kept locked by the police since Wednesday afternoon was not opened until Friday morning, a day before the party’s Dhaka divisional rally scheduled to be held on Saturday.

The police personnel were not allowing traffic movement on the road adjacent to the BNP central office on Friday for the second day.

They put barricade at both the ends of the road – at Nightingale crossing and at Fakirapul crossing – by setting temporary fences.

Anyone wishing to pass the road on foot are facing police check at the barricaded points.

The police kept the BNP central office locked and put barricades on the road following a clash between the police and BNP activists that left one dead, scores injured and nearly 500 opposition leaders and activists arrested.

A good number of police personnel were deployed in front of the party office.

The police action came ahead of BNP’s Dhaka divisional mass rally, scheduled to be held on Saturday.

Dhaka Metropolitan Police’s joint commissioner (operation) Biplab Sarkar on Thursday had said that they put barricade at both the ends of the road ‘to ensure safety of the people’.

He said that the BNP party office was still a crime scene as they seized cocktails and explosives there and, that is why, they kept the office under their control.