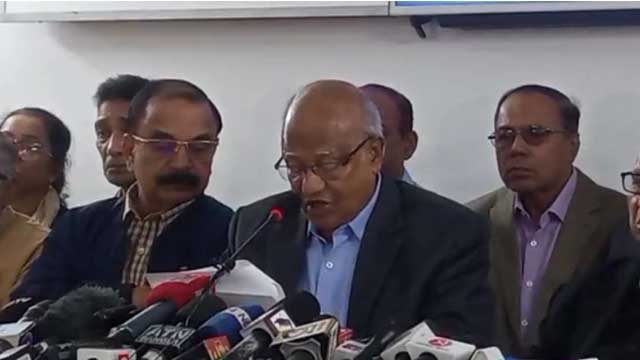 The main opposition Bangladesh Nationalist Party on Friday called upon the Dhaka city dwellers to spontaneously join their party’s rally in Golapbagh ground in the city’s Gopibagh peacefully to give the government a befitting reply to its efforts to foil a democratic programme.

‘We will hold the programme in Dhaka peacefully as we did in nine other divisional cities. We call upon people from all walks of life to participate in our programme spontaneously,’ said Khandaker Mosharraf Hossain, a former cabinet minister and the most senior member of the BNP’s standing committee.

He was speaking at a press conference held at the party chairperson’s Gulshan office at 3pm following a virtual meeting of the leaders of the BNP standing committee.

Speaking at the press conference, he alleged that the government had created unnecessary chaos over giving the party permission for venue to hold Saturday’s rally and bought time with an evil motive to foil the programme.

The BNP leader also said that the government resorted to violence at Naya Paltan on Wednesday and arrested many party leaders and activists and caused injuries to many others to spread panic among the people so that they didn’t join the rally.

‘We believe people will give a befitting reply to the government’s evil efforts by spontaneously joining the rally on Saturday,’ he said.

Mosharraf said that the party would start the rally from 11:00am on Saturday at the Golapbagh ground as Dhaka Metropolitan Police had already given permission to use the venue.

‘The arrest of Fakhrul and Abbas is an extreme manifestation of the government’s fascist character,’ he said.

He demanded the government immediately release the two top leaders and all other party leaders and activists who were arrested involving the rally on Saturday.

Earlier, Dhaka Metropolitan Police permitted the party to hold their rally at Golapbagh.

BNP vice-chairman AZM Zahid Hossain disclosed the matter to the media after a meeting with Chief of Detective Branch of Dhaka Metropolitan Police Harun Or Rashid on Friday noon.

The DB chief also assured the delegation of ensuring security measures at the venue and asked to take preparations to hold the rally in Golapbagh ground, said Zahid.

BNP in the early hours on Friday claimed that plainclothes police picked up Fakhrul and Abbas from their homes in separate raids in Dhaka.

Earlier on Thursday night, a BNP delegation had a six-hour meeting with the DMP commissioner where they talked about holding the rally on Saturday (December 10) either at Kamalapur Stadium or Mirpur Bangla College ground.

Later, Abbas with some BNP leaders visited the two venues.

At that meeting, police authorities assured of reopening the BNP office at Nayapaltan, however the area remained under police control since Friday morning.

On Wednesday, a Swechchasebak Dal leader was killed and around 50 others were injured in a clash between police and the BNP activists in front of the party’s Nayapaltan central office ahead of its December 10 rally.

Following the clash, police raided the BNP office and arrested around 300 party leaders and activists from there.

As part of the move to continue the pace of its ongoing movement, the BNP on September 27 announced a series of public rallies in 10 divisional cities to denounce the price hike of daily essentials and fuels, the death of five party men in previous police action in Bhola, Narayanganj, Munshiganj and Jashore, and to ensure the freedom of BNP Chairperson Khaleda Zia.

BNP has long been demanding that the next general election be held under a caretaker government, not under any political government — a demand sharply rejected by the ruling Awami League as the constitution does not allow it to happen.