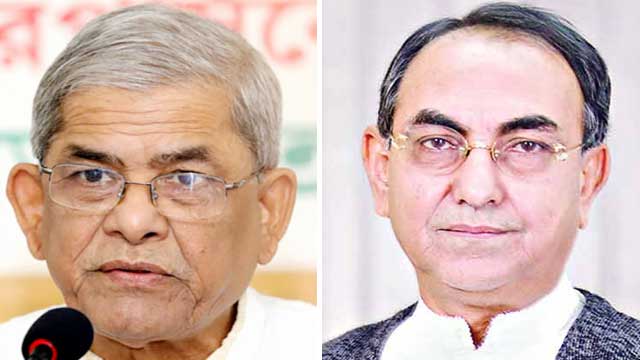 A Metropolitan Magistrate Court in Dhaka sent the main opposition Bangladesh Nationalist Party secretary general Mirza Fakhrul Islam Alamgir and standing committee member Mirza Abbas to jail in a case over Wednesday’s clash between police and leaders and activists of the BNP.

Dhaka Metropolitan Police’s detective branch inspector Md Tariqul Islam produced the BNP top leaders before the court of metropolitan magistrate Mohammad Jasim and sought to keep them detained until completion of the investigation into the case.

The police officer also opposed the bail plea submitted by the two BNP leaders and accused them of planning, inciting and ordering the attacks on the police by the BNP activists in front of the BNP central office at Naya Paltan in Dhaka on Wednesday.

The Wednesday clash between the police and BNP activists left an activist of the BNP shot dead and over a hundred injured.

Earlier at around noon, the Dhaka Metropolitan Police’s additional commissioner for Detective Branch Harun-or-Rashid said that they arrested the BNP secretary general Mirza Fakhrul Islam Alamgir and standing committee member Mirza Abbas in a case over Wednesday’s clash between police and leaders and activists of the BNP.

Harun said this about a couple of hours after saying that the two BNP leaders were taken to the DB office for interrogation on some issues and that the police would take further decision after the interrogation.

The BNP said that the two leaders were picked up from their houses in Dhaka at about 3:00am on Friday.

Mirza Fakhrul’s wife Rahat Ara Begum at about 6:00am told reporters that four police officials came to their house at night and took him away with them.

‘They told us two to three cases were filed against him between yesterday and day before yesterday,’ Rahat was found saying in a video posted on the Facebook page of BNP Media Cell.

The police did not misbehave with the family members, but they slapped some security guards who were late to open the door, she said.

The police arrested Fakhrul and Abbas only a day before the opposition party’s Dhaka mass rally, scheduled to be held on Saturday.

On Wednesday, an activist of the BNP was shot dead and over a hundred were injured as the police clashed with supporters of the BNP in front of its Naya Paltan central office and at nearby places.

Following the clash, police stormed into the party office and arrested dozens, including senior leaders in Dhaka.

On Thursday, the police filed four cases with the Paltan, Motijheel, Shahjahanpur and Ramna police stations against some 3,000 leaders and activists of BNP over Wednesday’s clash.

The police have so far arrested about 500 leaders and activists of BNP in the cases.

The police also took control of and barricaded the road from the Nightingale Crossing to the Fakirap[ool Crossing at Naya Paltan after the clash, halting the traffic movement, and locked up the BNP central office designating it as a ‘crime scene’ as law enforcers claimed to have recovered crude bombs and other explosive there.