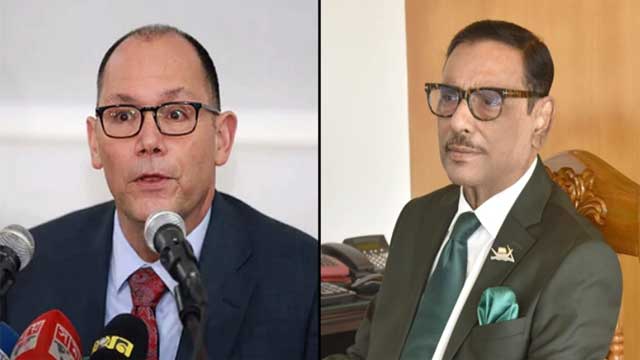 Ruling Awami League general secretary Obaidul Quader on Friday urged United States ambassador to Bangladesh Peter Haas not to harm the friendship with Bangladesh by making unwanted comments about Bangladesh elections and the rule of law.

He said this at the first preparatory meeting of the 22nd National Council at the political office of the party president in capital’s Dhanmondi area.

‘Do not make unwanted comments or interfere in any issue of Bangladesh. Election fraud is not only happening in Bangladesh, but also in the United States. There is still another party complaining about election rigging in the US,’ said Quader.

He said that mass shootings were common in the US. ‘Every day two, three or five people are killed in mass shootings. But you are talking about the human rights of Bangladesh.’

‘Sheikh Hasina will not listen to anybody’s orders. She does not fear anyone except Allah.’

‘We have bitter experiences with the US. We saw their role in 1971 and 1975. Despite all these incidents, we want a good relationship with the US.’

He also said that no one would be benefitted from this type of comment and that these would only be a barrier to good relations.

Bangladesh wants to maintain friendship with the US, he added.

On Thursday, the US Embassy in Dhaka expressed its concern over reports of intimidation and political violence in Dhaka and called on everyone to respect the rule of law.

‘We are concerned about reports of intimidation and political violence in Dhaka and call on everyone to respect the rule of law and to refrain from violence, harassment, and intimidation,’ Haas said in a message through the verified Facebook page of the Embassy on Thursday.

He said that they encouraged government authorities to investigate these reports of violence and to protect the fundamental freedoms of expression, association, and peaceful assembly.