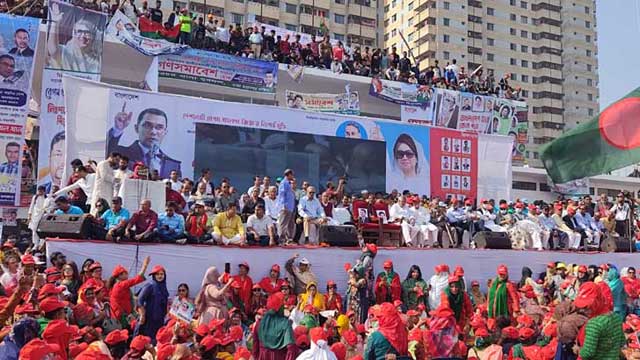 Bangladesh Nationalist Party lawmakers on Saturday told the party’s Dhaka divisional rally that all the seven lawmakers of the party would resign from the parliament.

Six lawmakers, out of the seven, addressed the rally at Golapbagh field in Dhaka one after another and announced the decision.

‘We don’t have any benefit to stay as MPs. We joined parliament to see how much space we get. But it is all the same, being MPs or not, so we have announced resignation,’ she said.

Another lawmaker Golam Mohammad Sirajul Islam said that all the seven lawmakers of the party have decided to resign from the parliament.

They accused the government of failing in all the sectors, destroying the country’s democratic institutions, and supressing the opposition leaders and activists.

Besides Siraj and Rumeen, five other lawmakers are Md Aminul Islam from Chapainawabganj-2, Md Harunur Rashid of Chapainawabganj-3, Abdus Sattar of Brahmanbaria-2, Md Mosharraf Hossain of Bogura-4 and Zahidur Rahman of Thakurgaon-3.

Only Harunur Rashid was not present in the rally as he was staying abroad.

Earlier, the party asked the lawmakers to resign from parliament as the party will announced a 10-point demand including dissolution of parliament from Saturday’s rally.

BNP is holding its 10th and the last rally from where the party will announce their demands for launching a simultaneous movement.