Govt to fall with forging of national unity: BNP 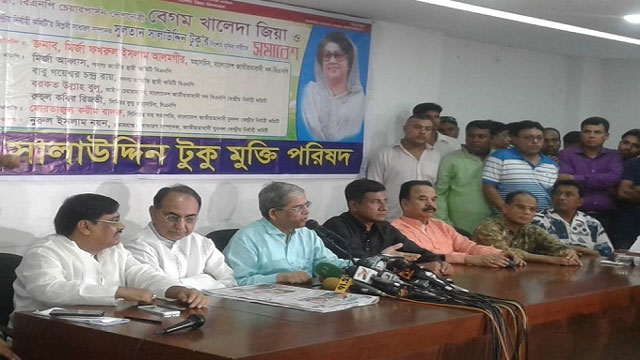 Dhaka, Jun 28 (Just News): BNP secretary general Mirza Fakhrul Islam Alamgir on Thursday said this government will not last for even three days if there is a national unity they are looking for.

"Our target is to wage a strong movement through creating a national unity. We've already started working on forging the national unity and we'll be successful in it," he said.

Speaking at a discussion, the BNP leader further said, "All now have become conscious and concerned as they think the country's current situation can't continue. A unity of people of all walks of life is now crucial to change the situation. Awami League won't be able to stay in power for even three days if we can be successful."

Fakhrul urged his party colleagues to get organised and prepare for a street movement to realise their demands.

"If the national unity is created, it'll lead us to a path of movement. Be brave and take to the streets instead of staying home. Reinforce the organisational strength with united efforts as we need to increase the presence of youths on the streets," he said pointing at BNP leaders and activists.

The BNP leader also urged his party colleagues to work for mobilising public support and involve people with their movement to make it a success.

Criticising the government for what he said its continued repressive acts, Fakhrul said most BNP leaders and activists now have become like refugees as they have to stay here and there deserting thir onw neighbourhoods and homes.

About the recent city polls, the BNP leader said their party has got benefited by joining the Khulna and Gazipur city polls as those have unmasked the government and the Election Commission once again.

Fakhrul said the national dailies depicted how the election was held while US Ambassador Marcia Bernicat also voiced concern over the Khulna and Gazipur polls.

He said the two city polls also justified further their party's demand for holding the next polls under a non-party administration as it has proved again that fair and credible elections cannot be held under the current regime and the Election Commission. "So we can justify our logic to intensify our movement. We'll also get international support."

The BNP secretary general said though they nominated their party's mayoral candidates in Rajshahi, Sylhet and Barishal city polls, they will decide whether they will stay in the polls or not observing the attitude of the government the EC.