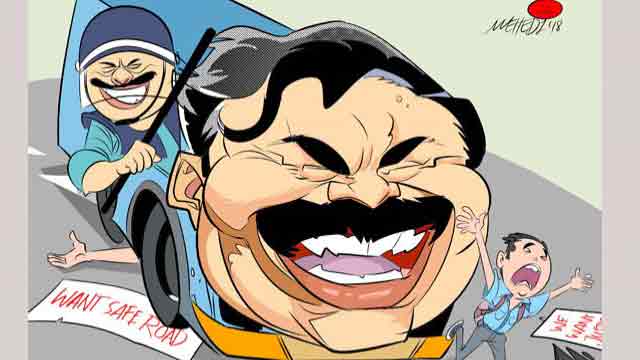 ‘You know journalists talk in different ways. I smiled in response to journalists’ questions. I am sorry and ashamed if anyone got hurt by my smile,’ he said, a flicker of smile slipping through his lips.

He also urged the bereaved families to forgive him for his speech.

On Sunday, two students of Shaheed Ramiz Uddin Cantonment College were killed by a reckless bus at Kurmitola.

That day, replying to journalists at secretariat, Shajahan Khan said people responsible for road accidents would get punished as per gravity of the crime but he was smiling even when the deaths of the two students were mentioned.

On Monday, he said that his resignation was no solution to traffic accidents and he was keeping effective role in reducing accidents.

On Tuesday, the minister said, ‘I have accepted the criticism. Is smile an offence? I always smile. People love smiling faces, so do Allah. If it is an offence, I won’t smile anymore,’ he said, with a smile hanging from his lips.

He was attending a meeting of representatives of Sramik Karmachari Peshajibi Muktijoddha Samanway Parishad at BCIC Bhaban in Motijheel where the Parishad activists blasted social media users who criticised the minister’s smile and termed them as agents of BNP-Jamaat.

‘I told the journalists that it was not the subject of discussion for that day,’ he said and added that if any reckless driver killed any person, no organisation would support him.

He also claimed that according to Bangladesh Police reports the number of road accidents came down in the last 10 years.

Bangladesh Road Transport Workers Federation general secretary Osman Ali claimed that media distorted speeches of Shajahan Khan time to time.
‘We are not killers, not khansena. We are servant of the country,’ he added.

The Parishad leaders also said that Shajahan Khan was a victim of different conspiracies.