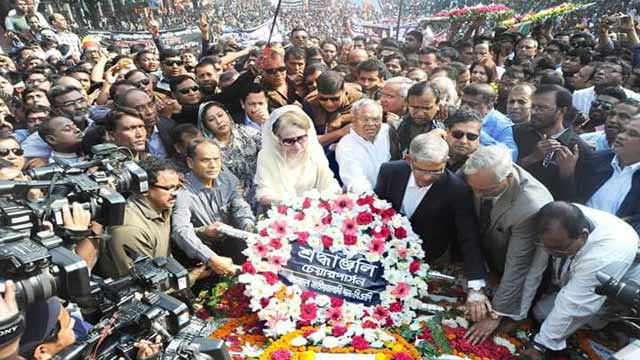 Khaleda together with party senior leaders placed the wreaths at 10:50am and stood in a solemn silence there for a while as a mark of respect to the great national heroes who sacrificed their lives for the cause of the country.

Talking to reporters before placing the wreaths, Fakhrul said democracy, for which the nation waged a war in 1971 and liberated the country, is now absent in the country. “We’re now living in a confined situation.”

Mentioning that BNP has been on a struggle for a long time to restore democracy, he said adding, We’ll surely win this fight.

On this day in 1971, country’s renowned academicians, doctors, engineers, journalists, artists, teachers and other eminent personalities were dragged out of their homes, blindfolded and taken to unknown places and then brutally tortured and slaughtered.

Their bodies were later dumped at Rayerbazar, Mirpur and some other killing fields in the capital.