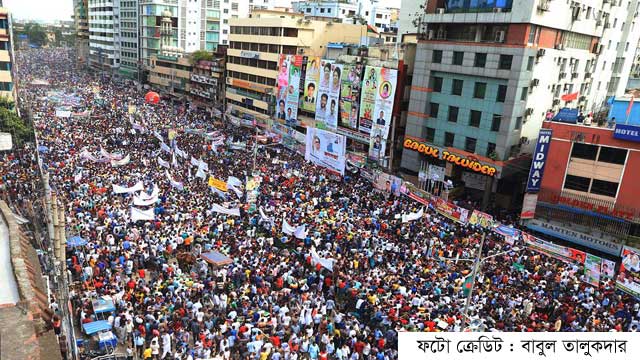 Dhaka, Sep 1 (Just News): Thousands of leaders and activists of Bangladesh Nationalist Party on Saturday gathered at Nayapaltan in Dhaka to attend a rally marking the party's 40th founding anniversary.

Leaders and activists of BNP and its front and associate organisations from different parts of Dhaka city and adjacent districts started to surging in front of BNP central office at Nayapaltan from around noon.

The road stretch between Kakrail and Fakirerpul filled up within 2:00pm.

The leaders and activists came to the venue with procession wearing caps of different colours, holding banners, festoons, placards and band parties.

The movement of vehicles on road in front of BNP headquarters stopped around 1 pm.

United News of Bangladesh adds: Bangladesh Nationalist Party on Saturday took a fresh vow to continue its movement for 'ousting' the current government to 'restore' democracy and people's rights.

‘We're taking a pledge on this day of our founding anniversary to continue our struggle to remove the monstrous government, and free our leader Khaleda Zia for the restoration of democracy,’ said BNP secretary general Mirza Fakhrul Islam Alamgir.

The BNP leader also hoped that their party's efforts to end 'misrule' will turn out to be successful very soon.

Fakhrul came up with the remarks while talking to reporters after placing wreaths at BNP founder Ziaur Rahman's grave along with party's leaders and activists, marking its 40th founding anniversary.

He alleged that the government has snatched people's basic rights and destroyed all the democratic institutions. ‘It's now the main challenge for BNP to restore democracy and people's rights.’

On September 1, 1978, late President Ziaur Rahman founded the party with a 19-point programme to build a self-reliant Bangladesh.

Earlier in the morning, the party flag was hoisted atop BNP's Nayapaltan central office and all other offices across the country, marking the day.

Besides, the party's associate bodies and it’s all units across the country marked the day holding various programmes, including discussion meetings.

The party will also arrange a discussion at the Institution of Engineers, Bangladesh on Sunday.

The party is celebrating the founding anniversary this year sans its chairperson Begum Khaleda Zia as she has been in jail since February 8 after a lower court convicted her in a graft case.

After the assassination of Zia on May 30, 1981 in Chittagong, his widow Khaleda Zia took over the party leadership.

In its 38 years' journey, BNP had been in power for four times and was in the opposition bench twice. But following the January-5, 2014 election boycott, the party is now out of parliament.

BNP has been out of power for over 11 years since the 1/11 political changeover.

BNP senior leaders think they are passing through the toughest time since the party's foundation as it is out of power for a decade, but they hope it will turnaround very soon braving all the odds and obstacles.