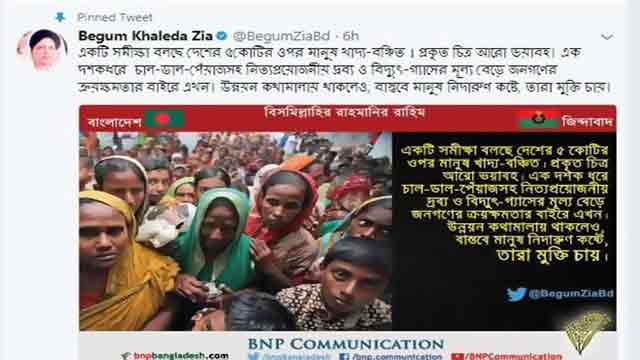 Terming the claims of development as rhetoric, the former prime minister said in a twitter message that people are “living in an unbearable situation”.

“Price hike of essential commodities including rice, onion and electricity in the last ten years have robbed them of buying power,” she tweeted.

The BNP leader referred to a study report which “found that 50 million Bangladeshis are deprived of foods”.

“Development exists in rhetoric, people are in unbearable situation,” she said and hastened to add: “They want a break.”

In another twitter message on the eve of the Victory Day, the BNP chief mentioned that economic freedom remains elusive even 46 years into the liberation of the country.

“Let’s be united to attain the dreams of freedom fighters in building a democratic, politico-economical & socially fair Bangladesh,” she added.