Anti-liberation forces will never be able to come to power, says Hasina 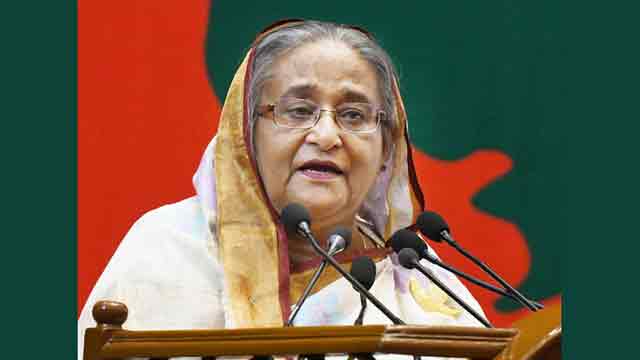 Dhaka, Dec 17 (Just News): Prime minister Sheikh Hasina on Sunday expressed her belief that the people would reject forever the anti-liberation forces, their patrons, perpetrators of brutal arson attacks and the corrupt elements in votes.

“They will never be able to come to power. . . the people will not allow their installation to power,” she said while chairing an Awami League discussion marking the Martyred Intellectuals’ Day and Victory Day 2017 at Bangabandhu International Conference Centre (BICC).

“The Victory Day celebrations drew huge enthusiast response of people particularly the youths this year as the history is now open before them,” Sheikh Hasina told the discussion as the party president, reports BSS.

She added that with their massive response the youths “made us hopeful about our prosperous future (as) none could now misguide them”.

She said 1971 martyrs’ sacrifices would never go in vein and none could play with people’s fate as everyone started getting the benefit of independence and aware of their future while Bangladesh now appeared as a dignified nation all over the world.

Sheikh Hasina said BNP and some other political organisations rehabilitated the anti-liberation forces after Bangabandhu’s killing and even in recent years they inducted convicted war criminals sons and daughters of in their parties.

“The war criminals of Second World War are still being tried on charge of committing crimes against humanity . . . don’t they (BNP) have any sense or conscience,” she asked.

Hasina said Awami League is the only party which is working for changing the peoples’ lot as part of a long heritage and recalled that Bangabandhu Sheikh Mujibur Rahman relinquished his ministerial position to reorganise the party at grassroots and preparing it for liberation.

She said Bangabandhu had floated the six-point demand to free the nation of the Pakistani clutches and on his own tread earned peoples mandate for the charter.

“From that time the Pakistani rulers started hatching conspiracy against him,” she said.

Sheikh Hasina said Pakistani juntas could not accept the Bengalis installation to power and therefore after Awami League’s overwhelming 1970 election victory they started to hatch their conspiracy afresh while they thought that no military power in the world could defeat them.

“But people of Bangladesh with the support of India and freedom loving people across the world made sure the defeat of the Pakistani military even with the support of a section of collaborators who unlashed unprecedented atrocity on the people,” she said.