Vow to restore democracy in country 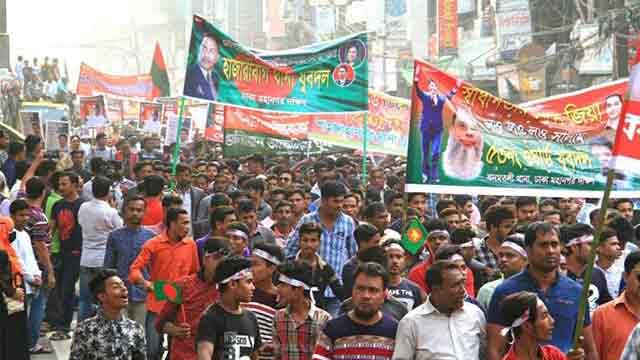 Dhaka, Dec 17 (Just News): Vowing afresh to forge a national unity for the restoration of democracy, BNP took out a Victory Day Rally in the city on Sunday marking the 47th Victory Day.

Thousands of leaders and activists of the party and its associate bodies started gathering in front of its Nayapaltan central office and its adjacent areas with small processions since noon, causing traffic congestions and public sufferings.

The BNP activists joined the colourful rally towards Malibagh from Nayapaltan, led by their central leaders, carrying national the flag, placards, banners and portraits of party top leaders amid huge presence of law enforcers.

After parading different roads through Bijoynagar, Kakrail and Shantinagar the rally concluded peacefully at Malibagh crossing around 4:15pm.

In a brief speech before taking out the rally, Fakhrul said the government wants to suppress people by snatching their all democratic rights only to perpetuate its power.

"We would like to say you (govt) won't be able to subdue people with repressive acts. Let's be vocal for the restoration of democracy by peacefully staging the rally. We're also calling for forging a national unity to this end," he said.

The BNP leader also urged the government to take steps for holding the next polls under a non-party neutral government.

Fakhrul said the main dream of freedom fighters for establishing democracy and people's rights could not be materialised even after 47 years of the country's independence.

He said those who are on a movement for democracy and people's rights are being oppressed and made disappeared and implicated in 'false' cases as a fascist government has been in power. "I call upon all to get united to establish a pro-people government through a credible election ensuring the fall of the current despotic regime."

Though the rally was scheduled to begin at 2 pm, it started about an hour later.

The traffic movement came to a halt in Nayapaltan and its adjoining areas for nearly three hours since 1:30pm causing immense sufferings to commuters.

Several hundred law enforcers were deployed at different points from Nayapaltan to Malibagh crossing to fend off any untoward incident.