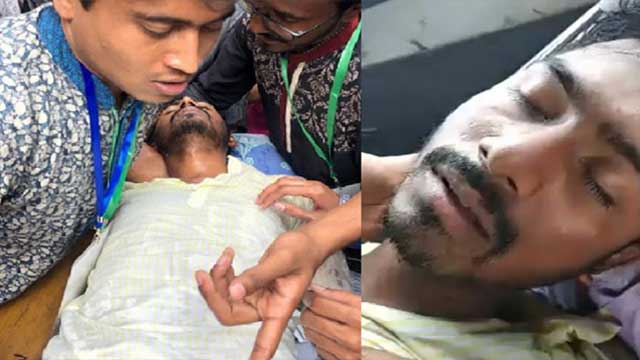 The incident took place at Rokeya Hall around midday during Ducsu election, under the nose of Chhatra League’s panel leaders for central Ducsu.

Popular quota reformist leader Nur was rushed to hospital last reported in an unconscious state, our correspondent reports from the spot.

According to what could be gathered from witnesses, Nur went to Rokeya Hall during protests over alleged irregularity involving ballot boxes.

“They beat him up in front of Chhatra League President Rezwanul Haque Chowdhury Shovon and General Secretary Golam Rabbani,” he said.

Nur himself was mumbling while being taken to the hospital, that it was Chhatra League activists who pounced on him.

Rabbani, general secretary candidate for Ducsu, denied Chhatra League’s involvement in the attack. “The girlsof the halls drove him away.”

It is to be noted that Chhatra League’s President Shovon is also its vice president candidate for Ducsu and Rabbani its general secretary candidate.

Also, previously, there has been reports of an attempted attack on the leftists’ panel leader Liton Nandi in front of Haji Muhammad Mohsin Hall.