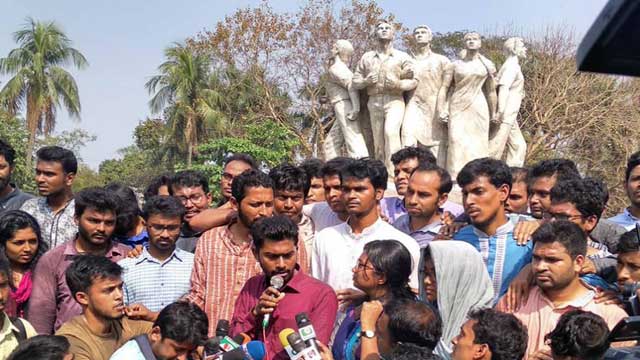 “The election results show that they could not defeat us even with rigging,” he said at a press conference at the base of Raju Sculpture this afternoon.

Nur, the fresh VP-elect from yesterday’s Ducsu election, was speaking at a press briefing after being attacked at campus, yet once again, by alleged Chhatra League men.

“We want re-election to the posts. None of our demands have been met. Our class boycott will continue indefinitely. Our further course will be announced later,” he said.

He was speaking as a representative of the greater coalition formed by leftists, independents, quota activists and other – who all boycotted Ducsu elections yesterday.

Nur went to the campus today, fresh from the hospital after yesterday’s assault, only to be targeted by “Chhatra League” at TSC again.

Later, after the attack, the greater coalition paraded up and down the Dhaka University campus with Nur at their lead protesting the “attack by Chhatra League”.