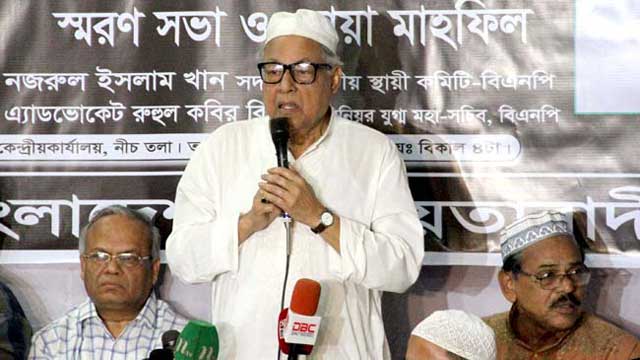 They came up with the allegations while speaking at doa mahfil arranged by Jatiyatabadi Sramik Dal in memory of its late executive president Abul Kashem Chowdhury at BNP’s Nayapaltan central office.

“There’re many conspiracies on to defame Khaleda Zia. She’s was convicted in false cases though she had no involvement with allegations. The government is saying she was punished for stealing the money of orphans, though no money was misappropriated,” said Nazrul.

He said the ruling party leaders try to malign Khaleda resorting to dirty politics and strategy as she is the most popular leader in the country.

Nazrul, a BNP standing committee member, said the government has enchained democracy by sending their chairperson to jail.

He demanded the government release Khaleda immediately so that she can receive proper treatment for her serious illness.

The BNP leader also alleged that the government has destroyed the country’s election system by indulging in ‘vote fraud, ballot stuffing’ and election ‘manipulation’.

He said the very thin presence of voters at polling stations during the recent upazila polls has manifested how people lost their confidence and interests in the country’s election system.

Speaking at the programme, Rizvi said a private television took the interview of Fatema’s father about her stay in jail with Khaleda Zia by intimidating him.

“As our leader (Khaleda Zia) has been suffering from various ailments, a person is necessary to stay with her. Fatema has been with her and she stays out of the prison cell. But a pro-government media has indulged in a foul game over the matter.”

He said the media which took the interview of Fatema’s father with an evil motive did not go to the fathers of rape victims in Noakhali’s Subarnachar and Kabirhat.

The BNP leader strongly denounced and protests such ‘propaganda’ by the media.