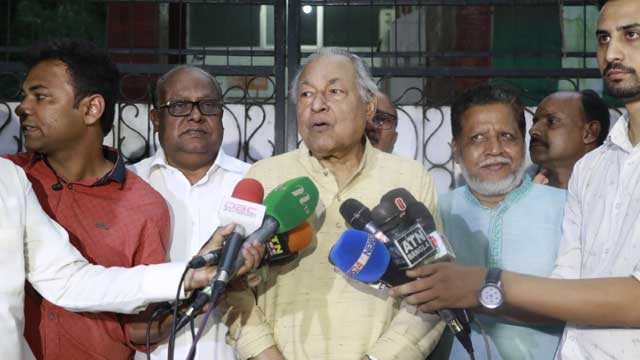 The BNP-led 20-party alliance on Monday decided to forge a greater unity with likeminded political parties for the ‘restoration’ of democracy in the country.

Talking to reporters after a meeting of the alliance, 20-party coordinator and BNP standing committee member Nazrul Islam Khan also told reporters that they decided to take some action programmes under the alliance to realise their various demands.

“Our meeting has decided in principle to take a step for forging a greater national unity uniting the political parties turned down the 11th parliamentary election and those are vocal for restoration of democracy,” he said.

He said they will also work out countrywide programmes demanding the government ensure the fair prices of farmers’ produce and reduce the prices of agricultural inputs.

Besides, he said, they decided to hold at least one meeting of the 20-party every month.

Asked about the alliance’s stance on the Andaleeve Rahman Partha’s Bangladesh Jatiya Party (BJP) which announced to quit the alliance, Nazrul said there is a misunderstanding with Partha, and it will be resolved soon.

He hoped that Partha will revoke his decision and will be there with the 20-party.

Sought comments whether there is any conflict between BNP’s partners of Jatiya Oikyafront and the 20-party, Nazrul replied in the negative. “Oikyafront was formed in consultation with the 20-party partners.”

On May 6, Partha announced to quit the 20-party coalition for various reasons, including swearing in by seven MPs of Jatiya Oikya Front.

Partha was invited to join the 20-party meeting, but he did not turn up.