China to pursue Myanmar for speedy repatriation of Rohingyas 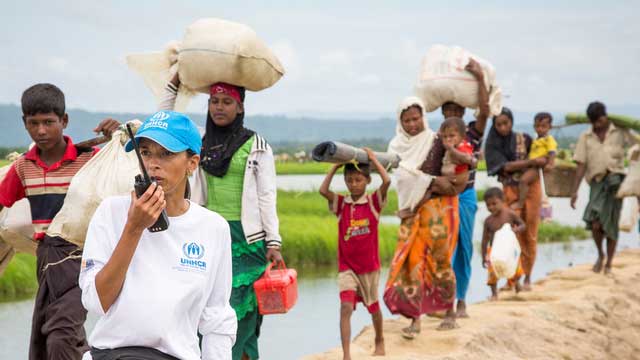 Beijing today assured Dhaka that it would try to persuade Myanmar for taking back its nationals from Bangladesh as Prime Minister Sheikh Hasina and her Chinese counterpart Li Keqiang held bilateral talks in the Chinese capital.

During the talks, the Chinese premier agreed with the Bangladesh prime minister on resolving the protracted crisis fast. “There is no doubt that it’s a big problem for Bangladesh,” he said.

Li Keqiang, however, stressed the need for solving the crisis bilaterally and assured that China will help end the crisis.

“Both Bangladesh and Myanmar are friends of China … we previously helped the two countries to solve the Rohingya problem and we’ll continue our efforts,” Foreign Secretary Md Shahidul Haque quoted the Chinese prime minister as saying while briefing reporters after the talks.

The Chinese premier said the two countries will have to find out a solution to this end through discussion.

In this connection, Keqiang mentioned that China has sent its foreign minister to Myanmar twice. “If needed, we’ll send our minister again to Myanmar so that the two countries get a solution to the crisis through discussion,” he said.

Shahidul Haque said in the meeting Prime Minister Sheikh Hasina gave emphasis on peace and stability in the region to achieve the cherished goals of development.

“But peace and stability are being affected in the region due to the Rohingya crisis,” she said.

“With passage of time, the challenge will be bigger and speedy repatriation of the Rohingyas to their homeland is its only solution,” she said.

The Bangladesh premier said the problem will be solved with only going back of the Rohingyas to their motherland.

She highlighted in which context the Rohingyas are not going back and said Myanmar will have to solve the problem and Bangladesh has nothing to do in this regard.

“We made all types of efforts in this regard, but the Rohingyas don’t want to go back as they are afraid of further atrocities,” she said.

To remove the fear, the prime minister, underscored the need for playing a role by China in building a conducive environment so that the Rohingyas can go back to their homeland with safety, dignity and own identity.

“They must have an access to their land property,” she said.

Responding to the statement of Bangladesh Prime Minister, Mr. Keqiang told her that Beijing was convinced that the Rohingya crisis is a big challenge for Bangladesh.

He thanked the Bangladesh prime minister for her humanitarian response to the crisis of Rohingyas.