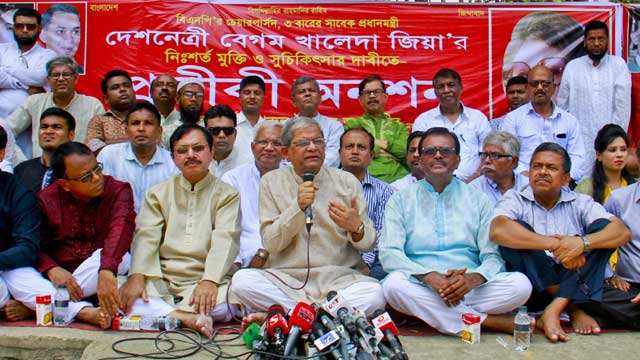 BNP on Friday alleged that the government has raised the gas tariff unfairly only to facilitate those ruling party leaders and businessmen who import Liquefied Natural Gas (LNG).

“The only reason behind the gas price hike is to create a scope for making quick buck by their (govt’s) people who import LNG,” said BNP secretary general Mirza Fakhrul Islam Alamgir said.

Speaking at a token hunger strike, he further said, “The gas price is also meant for cementing corruption, and collecting money from people to give subsidy to make up the high cost of imported LNG.”

On June 30, the government announced to raise the average gas price by 32.8 percent for the retail consumers in the country with effect from Monday last.

Accusing the government of establishing a reign of plundering, Fakhrul said ‘mega’ projects are being taken for ‘mega’ corruption. “The banking sector has been shattered with widespread plundering while the economy is now on the verge of collapse.”

He also alleged that the government is destroying all the democratic institutions one after another since it has no accountability to people. “The usurper government is controlling the judiciary, administration and the media. Even, they’re trying to control the army.”

The BNP leader said the government has increased taxes and widened the areas of VAT through the new national budget to collect money from people and thus make the pockets of ruling party men and their beneficiaries heavier.

“There’s no peace in public mind due to the misrule. They (people) want to get rid of the current suffocating situation,” he added.

Stating that their party chairperson Khaleda Zia has been ‘unfairly’ convicted and kept in jail in ‘false’ cases, Fakhrul said it has now proved that the judiciary cannot deal independently with the cases filed against the BNP chief.

Describing Khaleda Zia as the symbol of democracy, he said democracy will be restored when the BNP chairperson will be freed from jail.

The BNP leader also said their party is working to unite the country’s people alongside carrying out a legal battle for waging a strong movement to free Khaleda Zia from jail.

At the end of the programme, pro-BNP professionals broke their token hunger strike by drinking water provided by Fakhrul.