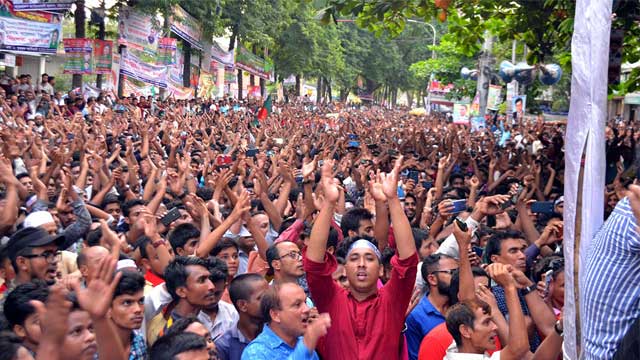 Speakers in a public rally organised by Chattogram Division unit BNP yesterday demanded cancellation of the present Election Commission (EC), and formation of a new commission.

“People have no trust in the Election Commission and electoral system, and so very few voters -- around 15 percent -- were present in the by-elections,” said BNP Secretary General Mirza Fakhrul Islam Alamgir.

“So, we demand that this election commission be cancelled and a new commission be formed comprising of qualified persons accepted by everybody,” he said.

He was addressing the rally as chief guest, at Nur Ahmed Road in Kazir Dewri of the port city, demanding release of party chief Khaleda Zia from jail.

Several thousand supporters and activists of the party joined the rally, without any major hindrance. Although Chattogram Metropolitan Police gave permission for the rally only on Friday -- on 27 conditions – a large number of people flocked to the event from different upazilas of Chattogram and other neighbouring districts.

“They [government] are even interfering into the work of media,” Fakhrul said, adding that the government has made the judiciary, police and administration partisan.

Criticising the budget for 2019-20 fiscal, Fakhrul said it would favour the rich and bring miseries to the poor.

“Prices of essentials have already increased after the budget was passed,” he said, also criticising the increase in gas price.

Demanding that Khaleda Zia is freed from jail, Fakhrul said the government was not providing her proper treatment.

“She is critically ill... the government will have to free her for her proper treatment,” he said.

BNP national standing committee member Khondokar Mosharraf Hossain said the EC published detailed results of national polls after six months, where it was seen that 100 percent votes were cast in 213 poling centres. “This shows what kind of election it was,” he said.

Moudud Ahmed, also a standing committee member, said the government is responsible for creating a great crisis by not repatriating 11 lakh Rohingya refugees.

“It is the diplomatic failure of the government, for which no country stands by us,” he said. “Now the government is making permanent shelters for the Rohingyas... they would spread terrorism after a few days.”

“Rohingyas will have to be repatriated immediately... If the government fails, they should resign,” he said.

“Khaleda Zia was sentenced to five years’ imprisonment in a fake and trivial case. In such a case, she is not supposed to be imprisoned for five days,” he said, adding, “Us senior lawyers tried our best to free her on bail, but the influence of government is so strong that we could not succeed... However, we are trying.”

“When the government and parliament are illegal, how would other institutions of the state perform their constitutional duty properly?” he exclaimed.