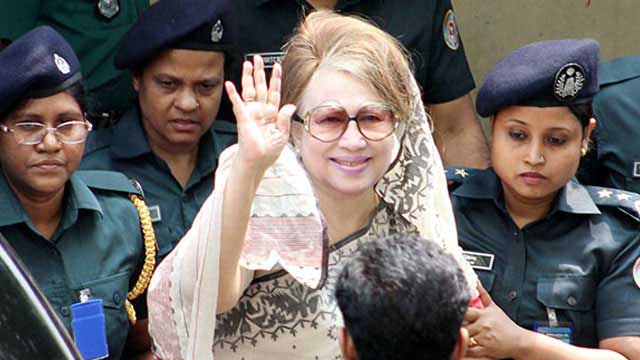 Opposition BNP on Saturday decided to move internationally to secure freedom and proper medical treatment of its ailing chairperson and former prime minister Begum Khaleda Zia as her health is deteriorating in the prison.

BNP secretary general Mirza Fakhrul Islam Alamgir informed the decision taken by the  party standing committee at its meeting at the  chairperson’s Gulshan office in the capital Saturday evening.

He said that the party also decided to go for a  movement to secure freedom for Khaleda Zia  they had no doubts that  she would get no justice  due to the hindrance created by the government on the way of legal proceddings.

‘For health issue and release of the party chairperson, we have decided to take steps internationally. We will inform the democratic countries how the Deshnetri  has been detained in jail through unjust methods. We will take appropriate measures in this regard,’ Fakhrul said.

‘Before the Eid-ul-Azha, a negative order regarding BNP chairperson Khaleda Zia’s bail came from High Court. From this, now we are in firm belief that the courts are not functioning  normally. So, we are not sure whether we will get justice. That is why, we will launch our movement for her freedom,’ he said.

He alleged that the government was controlling the court.

He alleged that the government did not allow them to arrange any programme in the month of August and said that BNP will launch the movement while celebrating its founding anniversary on September 1.

‘On the founding anniversary, we will hold processions, rallies and discussions at upazila, district and city levels. We will also hold a rally in the capital on the day and hold a discussion centrally on the next day,’ he said.

Khaleda Zia has been in jail since February 8, 2018, the day when a special court in Dhaka sentenced her in a graft case. She was shifted to a cabin of Bangabandhu Sheikh Mujib Medical University for treatment on April 1 and since then she has been at BSMMU, in the sub jail.

BNP had been demanding her release claiming that the cases in which she was sentenced was based on false allegation and urging the government to provide her with treatment at a specialized hospital of Khaleda’s choice.

Before the Eid-ul-Azha, BNP arranged three separate rallies in three major cities of the country – Chattogram, Barishal and Khulna.

Fakhrul condemned the government for their failure for the rawhide price debacle and huge damage during the Eid-ul-Azha.

‘This was happened for the government’s negligence, failure and the syndicate patronized by the government’s special people. It was done deliberately for their own interest and to destroy hide industries in a planned way,’ he said.

He urged the government to take immediate initiatives to save the industry.

The BNP secretary general, referring to recent attack on the party vice-chairman Harunur Rashid’s home and on the house of a High Court Judge, alleged that the country lacked good governance and its law and order system had collapsed.

He reiterated the party’s demanded to provide treatment for dengue patients across the country free of cost.