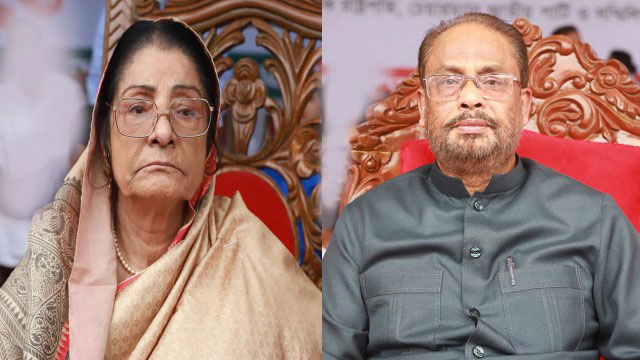 Jatiya Party has split into yet another faction after Raushan Ershad was announced chairperson by one of its faction.

Jatiya Party’s senior presidium member Anisul Islam Mahmud this morning declared the party’s senior co-chairperson Raushan Ershad as JP chairperson according to what he said was in line with the party’s charter effectively, splitting the party into two factions.

On July 18, GM Quader, who was acting chairman of Jatiya Party was announced as the party chairman.

Anisul today, at a briefing at Raushan’s Gulshan residence said GM Quader will remain in his previous--co-chairman.

Following the announcement, GM Quader called a press briefing at the party’s Banani office and said action will be taken against those who declared Raushan Ershad as the party chair.

He said in the briefing that according to the party charter, he is still the chairman. And those who declared Raushan Ershad as the chair broke the discipline of the party and action will be taken against them in this regard, he added.

While holding the press release at Raushan’s Gulshan residence, Anisul Islam said the party will hold a council within six months to elect a new chairman. Moshiur Rahman Ranga will remain the party’s secretary general.

In the briefing, Rowshan urged all to get united with the party.

However, both factions claimed JP’s Secretary General Moshiur Rahman Ranga remains with them.

So far, JP has split into four factions and with this, there are five factions of JP.

There had been a rift within the JP over its leadership for several months. The rift grew wider after party founder and former military ruler HM Ershad passed away at Combined Military Hospital in Dhaka on July 14, said party sources.