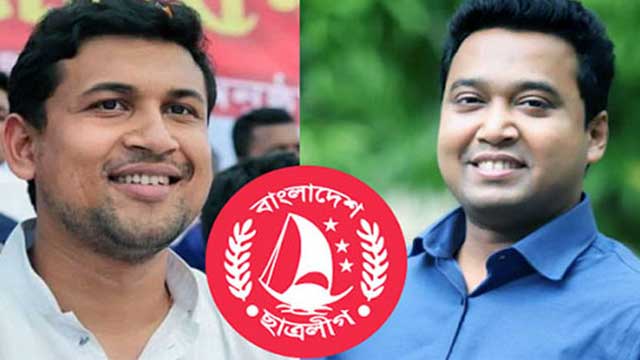 Awami League president and prime minister Sheikh Hasina on Saturday removed the incumbent president and secretary of the Bangladesh Chhatra League, an associate body of the AL amid allegations of their controversial activities.

She appointed an acting president and an acting general secretary for the student organisation till its next council session.

In the last council, the BCL vested all power to Sheikh Hasina as the president of Awami League, who nominated Shovon and Rabbani as president and general secretary on July 31 last year.

Nearly one year later, they announced the 301-member central committee, but those who were excluded started criticising and protesting the new committee.

Later on September 10, Shovon and Rabbani’s special passes to the Gono Bhaban were suspended.

Rezwanul Haque Chowdhury and Golam Rabbani were dropped from BCL’s two top positions before the completed their two-year term, AL general secretary Obaidul Quader told reporters at a press conference at the Ganabhaban.

The decision came from a meeting of the AL central executive committee held at the Ganabhaban, the official residence of the prime minister, with Sheikh Hasina in the chair.

He also said that the next council session of the Awami League will be held on December 20-21.

The decision came a week after Sheikh Hasina at a joint meeting of the party’s parliamentary board and local government elections nomination board on September 7 gave opinion in favour of dissolving the BCL central committee, said AL leaders, as she was annoyed at the committee’s activities.

The BCL president and general secretary were then disallowed to enter the Ganabhaban from September 11.

The BCL top leaders faced various allegations after Jahangirnagar university vice-chancellor Farzana Islam made an oral complaint to the prime minister that the two leaders demanded ‘4 to 6 per cent in cut’ from a Tk 1,445-crore project at Jahangirnagar University.

A six per cent commission on the project fund would be Tk 86 crore.

On Tuesday, two vice-presidents of the organisation got involved in a scuffle over sitting inside Shovon’s car near Madhur Canteen in Dhaka University.

Shovon dragged a journalist inside his car when the latter was filming the scuffle and Shovon deleted the footage himself.