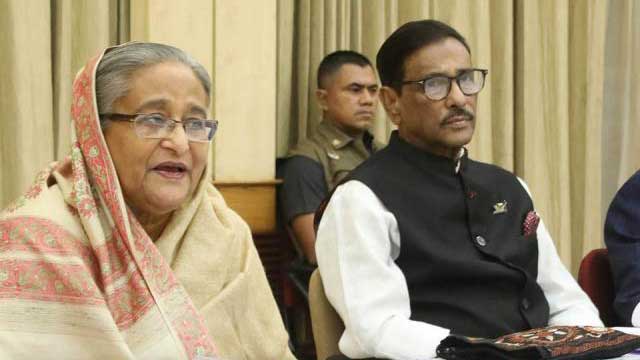 Jubo League has moved to rid itself of errant elements barely a day after the two top leaders of Chhatra League lost their posts for controversial activities.

The youth front of the ruling Awami League is going to hold a meeting of its tribunal, and its two key Dhaka city unit leaders have been summoned to appear before it.

The move follows a stern warning from Prime Minister and AL President Sheikh Hasina at a meeting of the AL Central Working Committee on Saturday night.

The AL chief expressed anger over various allegations against some Jubo League leaders, according to meeting sources.

She warned that she would wipe out errant elements from her party and its front organisation the same way her government dealt with militants, mentioned the sources.

Hasina also said those who are involved in criminal activities and patronise criminals must stop right now.

Earlier, at a meeting of the AL parliamentary board on September 7, the AL president also voiced resentment over alleged extortion by Jubo League leaders.

Talking to The Daily Star yesterday, Jubo League Chairman Omar Faruk Chowdhury said the tribunal will hold its meeting within a day or two. Samrat and Khalid will be asked to be present there as the AL president expressed anger over allegations against them.

According to the Jubo League charter, a tribunal meeting is convened to resolve any problem of the organisation and take action against its leaders involved in criminal and unethical activities.

Jubo League sources said the two leaders are going to lose their posts as the AL chief is angry over their “misdeeds”.

According to the sources, she resented her party men’s various criminal and unethical activities, and said she does not like “excesses”.

Yesterday, this correspondent talked to three AL leaders, and all of them said the removal of two top BCL leaders was a signal from the party president, and that she wants to purge her party and its associate bodies of errant elements.

“The removal of Chhatra League president and general secretary is just the start,” said one of them seeking anonymity.

At the beginning of Saturday’s meeting, Hasina said she didn’t want to celebrate her birthday on September 28 after seeing the agenda of the meeting. Celebrating her birthday topped the agenda.

A couple of party leaders then said they wanted to celebrate the day with festivity.

At this, Hasina angrily said she was very much aware of incidents of “extortion” by some Jubo League leaders, and the celebration of her birthday would be nothing but a veiled attempt to legalise extortion money,said meeting insiders.

“I don’t want any doa mehfil to be organised with extortion money,” she was quoted as saying by an AL central leader.

Hasina further said she had warned a Jubo League leader to stop extortion but he didn’t pay heed to her warning.

The AL president then showed her deputy Obaidul Quader a photo in her mobile phone in which a Jubo League leader was wielding a gun.

She also showed it to her other party colleagues at the meeting, and said, “Not a single procession was brought out after Bangabandhu’s assassination. But now these people are staging showdown with firearms.”

One of the central leaders, who attended the meeting, identified the man carrying the firearm as Khalid Mahmud Bhuiyan.

“We have been in power for three consecutive terms. Many people have made fortunes, but the fate of ordinary activists of my party remains unchanged,” the leader quoted the AL chief as saying.

The Daily Star yesterday tried to contact Samrat and Khalid over their mobile phones but couldn’t reach them.

At one point, Hasina urged her party colleagues to find new leadership for the party.

“The time has come for me to retire. I have to go. You will have to find new leadership for the party,” a central committee member quoted her as saying.

She also expressed disappointment at the party high-ups’ failure to hold councils of grassroots units, and said a party cannot run this way, mentioned meeting sources.

Yesterday, the AL in a press release said it decided to hold conferences for all expired grassroots units before the national council.

Quader already directed presidents and general secretaries of all district and city units in this regard, and asked them to hold councils of all expired committees by December 10.