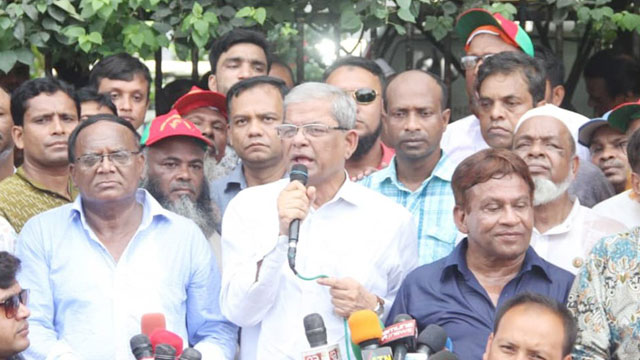 “Why only the two top leaders of Chhatra League be removed? Then, what will happen to the vice chancellor? Immediately, the vice chancellor should resign or she should be sacked,” Fakhrul made the demand while addressing a human chain in Dhaka this noon.

“The offence of demanding bribe has been named as fair share. This means, the BCL men demanded fair share and the vice chancellor has given Tk 1 crore as bribe,” the BNP leader said.

Amid the widespread allegation over the bribery scam, BCL President Shovon and General Secretary Rabbani were removed from their respective posts on Saturday.

Referring to the removal of two top Chhatra league leaders, Fakhrul said, “Corruption has eaten up every sector and institution including health, education and judiciary due to absence of accountability of the government.”

As part of the party’s protest programme, Jatiyatabadi Muktijoddha Dal, a front body of BNP, organised the human chain in front of the National Press Club demanding immediate release of party chairperson Khaleda Zia from jail.

“There is no space to seek remedy as all institutions have plunged into corruption,” Fakhrul said.