Abrar murder: We are living in a death valley, Fakhrul says 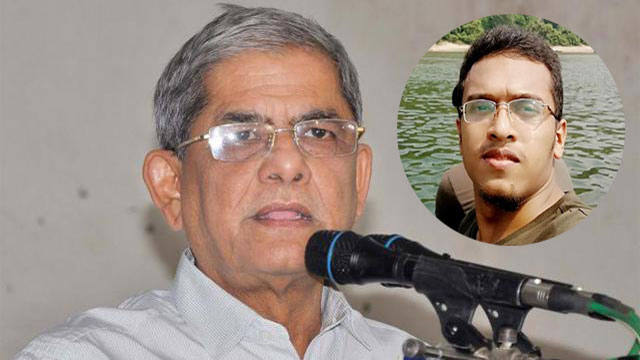 Condemning the murder of Buet student Abrar Fahad, BNP today alleged that the ruling party members have “stained their hands with blood” so that no one can speak and write about the misdeeds and wrongdoings of Awami League-led government.

“It seems to me that we are living in a death valley,” BNP Secretary General Mirza Fakhrul Islam Alamgir said in a statement issued after the death of Buet student Abrar Fahad.

“Armed terrorists killed Abrar in a barbaric way so that no one dares to speak, write and raise their voice against the misdeed and wrongdoing of the government,” Fakhrul said.

Abrar Fahad, a second-year student of electrical and electronic engineering of Bangladesh University of Engineering and Technology (Buet), was beaten to death today.

“Abrar was killed as he protested the government’s anti-state deal with India,” the BNP leader said extending his party’s heartiest sympathy to the bereaved family members.

In his last Facebook post, Abrar criticised the government for signing several deals with India including allowing the neighboring country for taking water from Feni river.

He also criticised the government for “deteriorating” the country’s law and order.