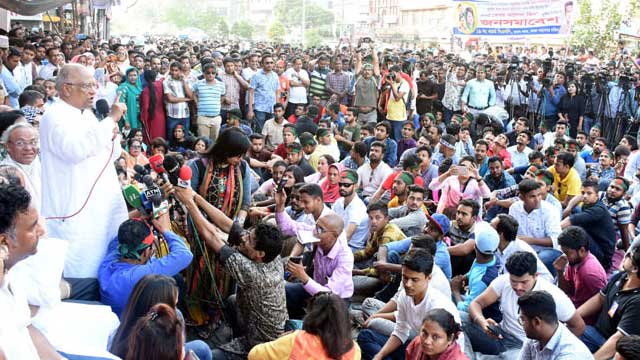 Main opposition BNP said Saturday that the blood of murdered BUET student Abrar Fahad would inspire the movement against expansionism and hegemony.

They said for protesting one sided deals with India, by prime minister Sheikh Hasina, Abrar was murdered in cold blood.

They called the deals anti-Bangladesh posing threats to Bangladesh’s existence.

They said that Abrar’s blood would set of the movement for protecting the rights of the people and the interests of Bangladesh.

At rallies in the capital and the divisional cities BNP leaders accused the government of making deals with India to serve Indian interest at the cost of Bangladesh and demanded their cancellation.

BNP organised the scheduled rallies in protest against Abrar’s murder.

BNP leaders demanded resignation of the government for signing the deals with India.

Addressing the rallies, senior BNP leaders described the government as illegal as it had usurped power by snatching the people’s right to vote.

They said that the government implicated Khaleda Zia in false cases to continue its ‘illegal rule and misdeeds.’

‘The government is now trapped in its misdeeds and its fall is a matter of time,’ they said.

In the capital to join the rally in front of BNP central office at Naya Paltan BNP activists leading small processions began to pour in since 11:00am. At one stage, police chased BNP activists near the Dainik Bangla Intersection.

Addressing as the chief guest, BNP standing committee member Khandaker Mosharraf Hossain said that Abrar was murdered for protesting against the ‘anti-Bangladesh’ deals in his facebook status.

‘Abrar’s protest became symbolic of the people’s protest. All the autocratic governments sowed the seeds of their falls by resorting to murders,’ he said.

He in this regard recalled the murder of Jehad by dictator Ershad Zehad on October 10, 1990, on the eve of his fall.

He said that prime minister Sheikh Hasina allowed India to withdraw the waters of the Feni River when India was dragging it feet on sharing the Teesta waters.

He said that Hasina allowed India to install 20 radars on the Bangladesh coastline on the pretext of joint surveillance of the coasts.

He said that she decided to export imported LPG to India to save its transportation costs.

Mosharraf said that she signed all the deals to serve Indian interests at the cost of Bangladesh only to cling to power she had grabbed.

According to reports received from Chattogram, Khulna, Rajshahi, Sylhet, Barishal, Rangpur and Mymensingh BNP held rallies in these divisional cities.