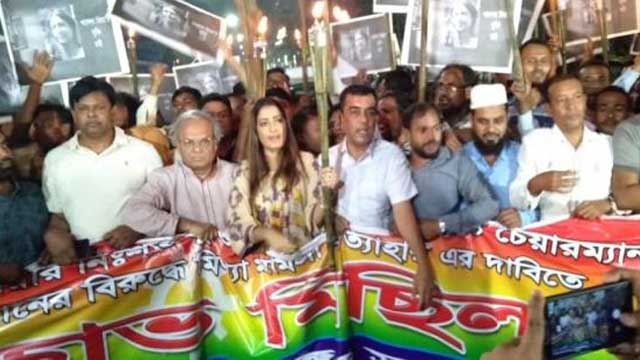 BNP brought out a torch procession in the city’s Nayapaltan area on Monday evening demanding the release of BNP Chairperson Khaleda Zia.

In a brief address after the procession, Rizvi said they have brought out the torch procession seeking their chairperson’s release. “Our programme is also meant for registering our protest against the misdeeds and unfair activities of the current government. BNP leaders and activists are now ready to take any protest programme against the government.”

Referring to Awami League Joint General Mahbubul Alam Hanif’s comment that Khaleda Zia will have to stay in jail for life, he said it has manifested that their chairperson was imprisoned at the behest of Prime Minister Sheikh Hasina.

He alleged that the government has plunged the country into darkness by destroying democracy, snatching people’s freedom of expression and sending Khaleda Zia to jail. “We’ll surely free our leader (Khaleda) and restore democracy in the country.”