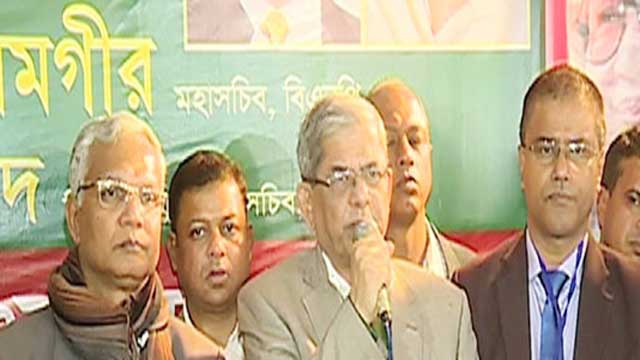 The 11th parliamentary election would be held at the end of the current year as prime minister Sheikh Hasina sated in her address to the nation on January 12 to mark completion of four years in office of her government.

BNP has been stating for last one year to place the framework of ‘election-supportive’ government that meant for a neutral government after the party chairperson Khaleda Zia mentioned about it during revealing formulas for reconstitution and empower of Election Commission in November 2016.

Inaugurating a free medical camp on Saturday, BNP secretary general Fakhrul said they think that there is a time for everything that meant at a proper time they would place before the nation the framework of ‘election-supportive’ government.

Explaining justification of their demand for poll-time government, Fakhrul said everyday new cases are being filed against BNP leaders and activists across the country, citing that Swechchhasebak Dal organising secretary Yasin Ali was arrested on Friday.

The ‘most popular leader’ of the country Khaleda Zia, was being ‘harassed’ in false cases, Fakhrul said.

But the government was speaking about the election, the secretary general said questioning how a fair election would be held if such atmosphere is prevailed.

He said BNP repeatedly said that they wanted an election-time neutral government.

‘We don’t want government of Awami League, government of Sheikh Hasina, because our experiences of long path stated that fair election can never be held under them’ the BNP secretary general said.

They (Awami League) want to take everything away flexing muscle power, he complained, saying this trend has to be resisted.

He reiterated that election would not be fair without poll-time neutral government but the ruling party was not listening to that and did not want to go to that course.

As they (AL) knew that they would suffer debacle and could never come to power if fair election is held under a neutral government and people can exercise their franchise, Fakhrul said.

BNP and most political parties had boycotted the 10th parliament election of January 5, 2014 demanding of holding the election under a non-party neutral government.