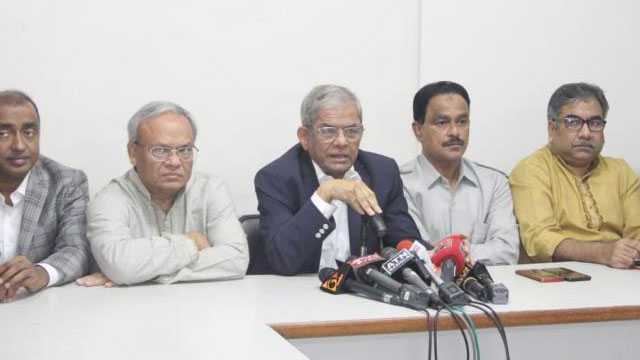 Protesting Indian Home Minister Amit Shah’s remark accusing the party of carrying out repression on Hindus in 2001, BNP on Tuesday said minorities were in fact protected during its rule.

He further said, “We can loudly say the interests of minorities were protected here during BNP’s government. Torture on them (minorities) has never been as much as it is during the Awami government.”

Fakhrul came up with the remarks while speaking at a press conference at BNP’s Nayapaltan central office.

While speaking in Lok Sabha on the Citizenship Amendment Bill on Monday, Shah criticised the BNP government and listed a number of instances of gang-rape of Hindu women and attacks on Hindu houses and temples in October, 2001.

Fakhrul also opposed the Citizenship Amendment Bill, which was passed in the Lok Sabha last night, as Muslims migrants were branded as illegal inhabitants of India in the law, and they were made ineligible to get the country’s citizenships.

Fakhrul criticised the government for what he said its failure to resolve the Rohingya crisis and mobilise international support to force Myanmar to take back its citizens.

He said the government is also not strongly raising voice at the international levels against genocide and persecution carried out by Myanmar on Rohingyas.

The BNP leader said the Gambia filed a case with International Court of Justice seeking action against Myanmar for the crime of genocide, but Bangladesh government has no role in this regard.