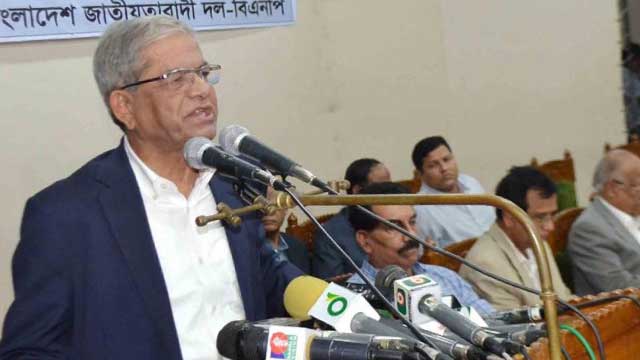 He made the remarks during a program on the occasion of Martyred Intellectual Day on Sunday (Dec 15).

He said that if a Bangladeshi stays back in India after the visa expires, Muslims will have to pay a fine of Tk 21,000 while Hindus have to pay only a 100 Rs.

“We can’t even imagine that such communal politics in a country like India. Communal laws will be cleared which will create more differences,” he said.

He said that given the Indian lawmakers’ attitude towards NRC and their claims that Bangladeshis are illegally entering India, hundreds and thousands of people will be forced into the country, mounting more pressure on Bangladesh’s independence, stability and security.

Fakhrul said that contrary to what was said in the Indian parliament, there is harmony amongst all the reliogins in Bangladesh.

“The government doesn’t speak anywhere for the country’s interest,” he said.

Fakhrul said that the BNP wants to know how many ruling party ministers and lawmakers fought during the Liberation War of 1971.

“Today the prime minister of the illegal government says that Ziaur Rahman was behind the 1975 assassination (Bangabandhu assasianation). But they don’t think for once what Awami League’s past is and what Ziaur Rahman’s role was,” he said.

“That day you ran away. Ziaur Rahman announced the War of Independence and inspired the nation to participate,” he added.

“Those who claimed to be the only torch bearers of Independence, they are the ones who destroyed democracy by establishing BAKSAL during the 1971 to 1975 regime,” he said.

He added that Moshtaque conspired with other Awami League leaders to remove Bangabandhu and formed the government.

The senior politican reiterated that the voting process has been completely destroyed and the government is trying to shut BNP up through torture and framing them in cases.