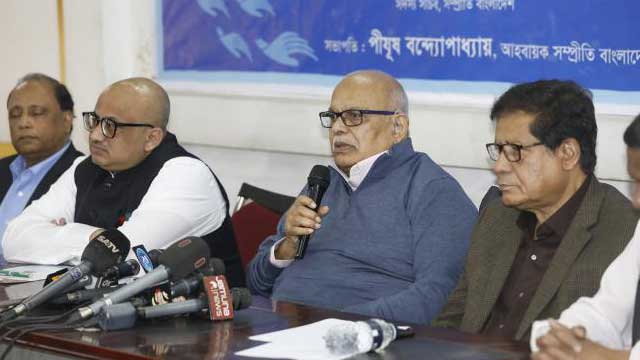 Language Movement veteran and journalist Abdul Gaffar Chowdhury on Sunday said that many Rajakars, who collaborated with Pakistani army during the 1971 liberation war, have joined ruling Awami League and the government should publish their list first.

"Many Rajakars are also in Awami League. They would come out in time of danger. List of those (Rajakars in Awami League) should be published first," Gaffar said.

The government on Saturday published a list of 10,789 Rajakars for the first time.

Gaffar was speaking at a programme organised by Samprity Bangladesh at Tofazzol Hossain Manik Mia Auditorium of the National Press Club in the capital.

He said Rajakars are also around prime minister Sheikh Hasina.

“So many Rajakars are still there. Even they are close to our prime minister Sheikh Hasina. I won't be able to come to Dhaka again if I tell you their name. So I don’t want to name them. This is the situation now,” said Gaffar, who now lives in the UK.

Fearing that the list of Rajakars would be incorrect one, Gaffar said, “Perhaps Rajakars themselves had prepared the list. They would include freedom fighters names on the list as Rajakars and vice versa.”

“Quader Mollah has been termed a martyr. The same newspaper once termed Monem Khan (former governor of erstwhile East Pakistan who was killed by a freedom fighter during Liberation War) as a martyr,” he added.

About Bangabandhu’s regime after the Liberation War, Gaffar said, “Bangabandhu was killed three months into forming BAKSAL. So there was no chance to evaluate the concept of BAKSAL. I think corruption and violence wouldn’t have risen to the extent it is now had BAKSAL remained functional.”

Praising prime minister Sheikh Hasina’s leadership, Gaffar said that the fundamentalists would ascend Bangladesh’s power if Sheikh Hasina was not there.

“I think it would be disastrous for Bangladesh without Sheikh Hasina in power. Bangladesh would become Afghanistan. Fundamentalists would come to power. Awami League must remain alert.”

Speaking at the programme, state minister for information Murad Hossain said the government would take stern action against The Daily Sangram newspaper for referring to convicted war criminal Quader Mollah as a martyr so that no one can dare to do so in the future.