See the matter with forgiveness: Hasina to freedom fighters 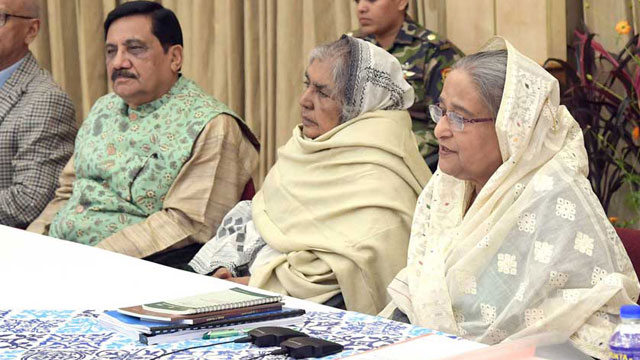 Prime Minister Sheikh Hasina today said no freedom fighter will be there in the list of Razakars as the recently disclosed list is no way that of the collaborators of Pakistani occupation forces.

“I want to say unequivocally that no freedom fighter will be labelled as Razakar. It won’t happen… it's impossible… it won’t occur at least during my tenure,” she said adding that the list of Razakars will be scrutinised further.

The Prime Minister said this while delivering her opening speech at the meeting of Bangladesh Awami League Central Working Committee at her official residence Gono Bhaban.

Sheikh Hasina urged the aggrieved families of freedom fighters to see the matter with compassion and forgiveness.

“I would like tell those who got hurt to be calm and see the matter with forgiveness… they [freedom fighters] can never be there in the list of Razakars… they can rest assured,” she said.

The prime minister said confusion was created as the Liberation War Affairs Ministry published the list on the website without scrutinising it.

Hasina said she earlier directed the Liberation War Ministry to publish the list following proper scrutiny, but the ministry did it in hurriedly ahead of the Victory Day.

“It (list) is no way the list of Razakars,” she said adding that there are separate lists of Razakars, Al-Badr and Al-Shams which had been published in the gazettes.

She said a list of terrors had been prepared during the Pakistan period where the names of freedom fighters were incorporated.