AL neither believe in democracy, nor independence: BNP 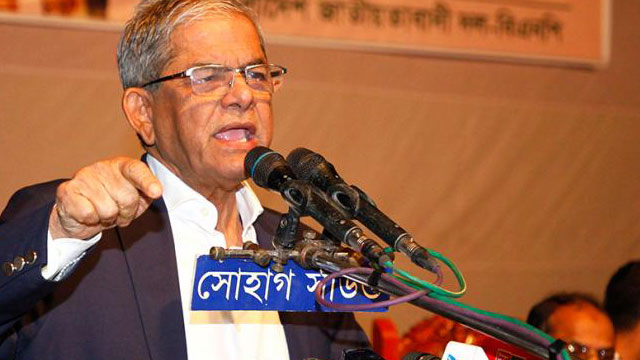 The Awami League government will be removed like the Pakistani forces were removed from Bangladesh, says the BNP.

“Bangladesh’s history says that injustice and repression will keep you in power for only so long,” Secretary General Mirza Fakhrul Islam Alamgir said while addressing an event on Wednesday.

Comparing the ruling party to the Pakistan forces, he said that they will be removed and “a government of the people will be installed.”

Alleging that everything relies on instructions from the top level, he added that party chief Khaleda Zia not getting bail proves that the judiciary is not independent either.

“How can we say that we have achieved Victory? Even after 48 years, we have to say that we are not free, our independence has been snatched from us,” he said.

The Awami League government will be removed like the Pakistani forces were removed from Bangladesh, says the BNP.The senior BNP leader said that the ruling party has snatched away freedom for the second time. “They neither believe in democracy, nor independence. They only believe in their own development.”

Fakhrul said that Khaleda has been imprisoned for AL to stay in power and called on everyone to take part in the movement for her freedom.

He slammed the government’s claim that Bangladesh is now a role model for development saying that in reality poverty has increased.

He added that the National Register of Citizens in India is putting Bangladesh at risk but the government is unable to protest.