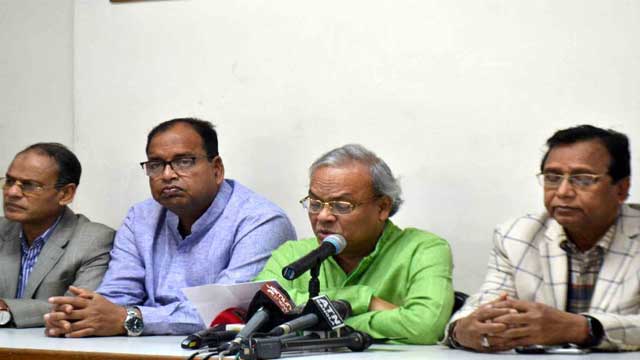 BNP on Monday alleged that Finance Minister AHM Mustafa Kamal has ruined the country’s economy by creating a scope for ruling party leaders to indulge in ‘widespread plundering of public money’.

“The self-declared No-1 finance minister has destroyed the country’s economy. We now find reports in the newspapers every day on plundering of thousands of crores of taka by ruling party men who are making second homes, siphoning off money abroad and building banks at their homes,” said BNP senior joint secretary general Ruhul Kabir Rizvi.

Rizvi criticised Mustafa Kamal for telling MPs in parliament that he is the No-1 Finance Minister in the world. “I’m noting down the finance minister’s such assertion as he’ll be responsible if I suffer heart attack out of laughing.”

Referring to TIB’s recent statistics that over 2 lakh foreigners are working in Bangladesh illegally, he criticised the government for allowing the illegal foreigners to work in the country while ‘half’ of the total population are unemployed.

The BNP leader also came down hard on Awami League general secretary Obaidul Quader for calling their party’s demand for reelection to two Dhaka city corporations groundless and claiming that there was no scope for rigging votes in the polls.

“I would like to tell Obaidul Quader that you had adopted a mechanism for vote rigging and you then fell sick…you’re spreading lies even though you fall sick frequently. Try to speak truth to some extent fearing the Creator (Allah),” he said.

He demanded the government take steps for ensuring advanced treatment for Khaleda Zia.